Mitchell Trubisky is not the answer in Pittsburgh 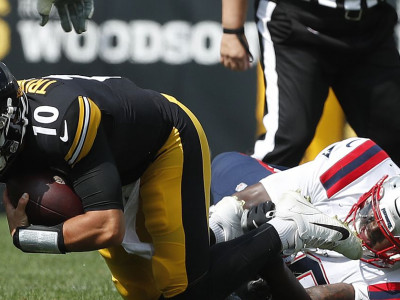 With 6:27 remaining in the third quarter Sunday against the New England Patriots, Mitchell Trubisky broke the huddle with the rest of the Pittsburgh Steelers offense and walked to the line of scrimmage. The Steelers faced a critical third down in New England territory, trailing 10-3. Offensive coordinator Matt Canada had decided it was time to be aggressive, and Trubisky might get his chance to deliver a huge play for the Pittsburgh offense as a result.

The design called for wide receivers Diontae Johnson and Chase Claypool to run deep crossing routes over the middle, while rookie wide receiver George Pickens stretched the Patriots’ secondary with a post route over the top.

As the play unfolded, there was a window for Trubisky to indeed be aggressive. While Claypool and Johnson muddled their crossing routes a bit, Pickens’ post route pulled the cornerback on that side of the field deep, leaving nothing but the green grass of the field at Acrisure Stadium in front of Johnson.

Trubisky saw it, and then flashed his eyes in the direction of running back Jaylen Warren on a checkdown route. Warren secured the catch, but gets buried by safety Jabrill Peppers right at the line of scrimmage, forcing Mike Tomlin to send his field goal unit onto the field.

As Trubisky came off the field, the crowd let him know how they felt about the decision.

By calling for rookie quarterback Kenny Pickett by name.

The Steelers kickoff Week 3 of the 2022 NFL season on Thursday Night Football, as they travel to northeast Ohio to take on their AFC North rivals the Cleveland Browns in a clash of 1-1 teams. But Trubisky’s play in Pittsburgh’s loss to the Patriots on Sunday has renewed the discussion over Pittsburgh’s decision to name Trubisky the team’s starting quarterback over Pickett, their first-round pick a few months ago.

The moment that had the crowd chanting for the rookie highlights an issue that is new new to Trubisky, and dates back to his days in Chicago. There are moments where, as a quarterback, you need to let it rip. You cannot play the position scared, looking over your shoulder after each play, fearing that your replacement is coming onto the field.

Because a fear of losing your job, causing you to not do your job, is the game’s biggest self-fulfilling prophecy.

Here is the play in question:

Yes, as noted above, the crossing routes are not executed to perfection, as Claypool and Johnson get tied up as they meet over the middle. But with Pickens pulling cornerback Jonathan Jones deep downfield in this single-high coverage, there is nothing but grass in front of Johnson as he works left-to-right. Trubisky has a chance to be aggressive here, to lead Johnson into space, and perhaps change the course of this game.

Instead he checks the ball down, and the boo birds start chirping.

If this were one play, a singular moment amidst an afternoon of loosely-controlled chaos, it would be one thing. But it was not the only moment where Trubisky passed up a chance to attack downfield for a safer checkdown option. Take this play from later in the third quarter:

Yes, the Steelers pick up the first down on this play, thanks to an incredible effort from Najee Harris. But this might be a prime example of what not to do as a quarterback. The Steelers run a three-level concept to the right, with Pickens on a deep post route, Johnson on a dig, and tight end Pat Friermuth on a curl route. Backside, Claypool runs a dig route of his own, with Harris releasing to the flat.

Both dig routes are open, and there is a window for Trubisky to target either with the post-safety staying deep in response to Pickens’ post route. But the quarterback checks it down.

Harris makes the most of this play, and the Steelers indeed finish the drive with a touchdown, but leaving opportunities for big plays on the field is rarely a winning recipe over time.

Now, this is not to say that Trubisky did nothing right in the loss to New England. There were moments where he executed the concepts well, and made some good reads and decisions with the football. Even aggressive ones, like this hole shot against two-high coverage late in the first half:

But the question facing Mike Tomlin and the Steelers for Week 3 — and beyond — is whether Trubisky can consistently elevate the Pittsburgh offense with more throws, and aggressive decisions like this one.

Or if they need to see if Pickett can.

Pittsburgh is a notoriously-patient organization, and they appear to be in no rush to force Pickett onto the field. After Sunday’s loss, the head coach noted that patience remains the guiding light inside the locker room. “I’m going to exercise appropriate patience and continue to teach and ask the guys to continue to learn in an effort to continue to push this train down the track and get better,” Tomlin said after the loss.

Yet he did agree with those who pointed out that Trubisky missed chances to push the ball downfield. In response to questions over whether the quarterback and the offense could be aggressive, Tomlin stated simply “I think he could and we could.”

Tonight could be a critical test for that patience. The Browns defense gave up some big plays in the passing game last week to Joe Flacco, as the New York Jets pulled out a miraculous comeback win. Longtime NFL reporter Ed Werner, on the radio Thursday morning, indicated that unless the offense improves, Pickett could get the call:

.@WerderEdESPN: "If things don't go well for the Steelers offense, we could see Kenny Pickett tonight"https://t.co/KlO4sr70ra— First Up (@FirstUp1050)

Trubisky could see more moments like those he saw on Sunday against the Patriots. Hanging in the pocket, with a opportunities to push the ball downfield.

How he responds could determine just how patient the Steelers — and their fans — truly are.