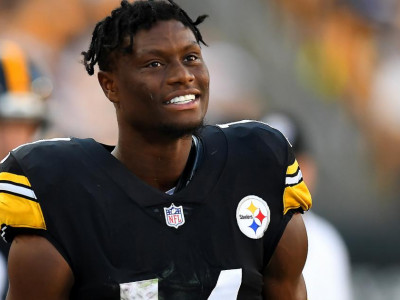 After Odell Beckham Jr. made his insane one-handed catch vs. the Cowboys on "Sunday Night Football" in 2014, the wide receiver was elevated into the upper echelon of pass catchers across the NFL. George Pickens' catch Thursday night may have put him into the same stratosphere.

In the first quarter of the "Thursday Night Football" matchup between the Steelers and Browns, the Pittsburgh rookie made an insane one-handed grab that is eerily similar to Beckham's from eight years ago:

This angle is wild. Catch of the year so far by George Pickens. pic.twitter.com/B2GGbA2c4l— Ari Meirov (@MySportsUpdate)

MORE: Why Pickens wasn't targeted much through two games with Steelers

While Beckham's overall degree of difficult was escalated, being mentioned in the same breath with OBJ's iconic catch is pretty good company to be in.

I’ve thought long and hard about this for 120 secs. This catch by Pickens is better than OBJ’s catch. pic.twitter.com/pWjxItpx1Y— Ben Cary (@Ben_Cary_)

Both are incredible. OBJ is facing the football the whole way. Has some separation with the defender.If Pickens was in the end zone …— Matt Lombardo (@MattLombardoNFL)

Pickens was heralded by many as sleeper pick in the 2022 NFL Draft. While he hasn't gotten going yet, he made it clear recently that he feels that he's a viable receiving target.

"I'm always [going to] have a step and always feel like 99 percent of the time I’m open even though the ball gets there in the air and [the defender] gets time to catch back up," he said. "But I'm open as soon as I get off the line."

Thursday is certainly Exhibit A for Pickens' case.