How Chadwell's nightmare season changed everything for Coastal Carolina 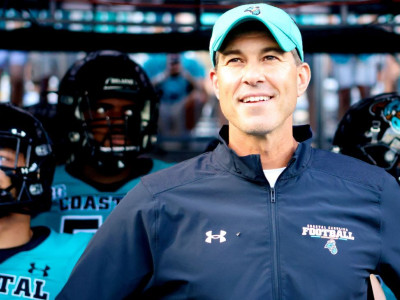 FIVE YEARS AGO, about halfway through the 2017 season and stuck in the middle of what would turn out to be a nine-game losing streak, Coastal Carolina Chanticleers interim coach Jamey Chadwell called a team meeting. Standing in front of a group of players he knew didn't like him, he told the assistants to leave and shut the door. What needed to be said in this room, however loud and however ugly it might get, would stay between them.

Alright, Chadwell told the players, let me have it.

At first, there was only silence. But Chadwell waited. He'd felt the animosity bubbling up for a while: the disapproving looks, the off-hand remarks, the direct challenges to his authority in practice. "It wasn't hidden," he said. He was like the substitute teacher nobody wanted. It was bad enough he'd only been there seven months. Assistant coach Bill Durkin said because Chadwell came from in-state rival Charleston Southern, players wondered, "How do we trust this guy?"

Trey Carter, a freshman guard, remembers how tense the meeting was. He said it was "cringeworthy" waiting for someone to speak up.

Chadwell wasn't the head coach they signed on to play for. He didn't look, sound or lead anything like Joe Moglia, who had to step away for health reasons. Moglia was an eccentric CEO type who prided himself on having no rules. Chadwell, on the other hand, was hard-nosed, hands-on and demanded accountability, which is fine when you're winning. But when you're not, well ...

"I know you want to say something," Chadwell reiterated. "I know you don't like some of the things going on. Let me have it."

So a few of the veterans finally did. Some of their criticism focused on coaching, but some of it was personal. And while Chadwell could live with players not liking him, what hurt most was they didn't seem to respect him.

Chadwell told the players he appreciated them sharing their thoughts, but he said he'd been given the job for a reason and some things were not going to change.

"And either you can decide to get on board and we can try to make the end of this season worthwhile," he said, "or we can go ahead and tank it. Your choice."

Chadwell had already made up his mind. This wasn't the challenge he signed on for either -- not by a long shot -- but he had to accept it and learn from it in order to grow.

"It was the worst year of my life," he said of his season as interim coach, leading Coastal through its first season playing in the FBS. "It was a dark time personally. But looking back, the Lord sort of takes you through and molds you to put you where you'll have an opportunity to use that test to better yourself, better your family, better your program, your organization, whatever it may be. And if I didn't go through '17 there's no way -- I believe wholeheartedly we wouldn't be this program and myself personally today without that challenging time."

Five years have passed and so much has changed. Coastal Carolina, led by full-time head coach Chadwell, has gone from struggling through the FBS transition to thriving as one of the premiere Group of 5 programs in the country, knocking off ranked teams and earning extended stays in the top 25. On Thursday, the Chanticleers (3-0) will look to remain undefeated when they go on the road to Georgia State (7:30 p.m. ET, ESPN2).

THERE WAS A time, not that long ago, when you could mention Coastal to a casual college football fan and they might ask, "Pacific or Atlantic?" Before the Chanticleers became the recognizable Group of 5 program they are today -- before many people knew what a chanticleer was -- they were perhaps known best for two unusual characteristics: their bright teal colored turf and a coach who was once the CEO of TD Ameritrade.

Moglia swapped a lucrative career in finance for coaching, joining Nebraska as an advisor to then-coach Bo Pelini before landing the head job at Coastal in 2012. And by all accounts he was an immediate success with 50 wins over his first five seasons.

But one team that was a consistent thorn in Moglia's side: Charleston Southern, which Chadwell took over in 2013, and had won three of their past four contests.

Eyeing the transition to the FBS and the Sun Belt Conference in 2017, Moglia had an idea. Why not bring Chadwell into the fold as offensive coordinator? So the two coaches spoke. First, Moglia told Chadwell how much he respected him. Then he laid out his plan.

"Now, you know that my name keeps coming up for different job opportunities," Moglia said he told Chadwell. "So if we go someplace else you can have your choice: You can come with me or you can succeed me at Coastal."

Or, in the event that another job didn't come along, Moglia said, "Eventually, I'm going to step down and when I do, barring anything crazy, you can succeed me then."

How will Saturday's top games affect the College Football Playoff chase? What are the current odds for the top four? The Allstate Playoff Predictor has the answers. Check back every week as the odds are updated following that week's games.

Chadwell was intrigued. Not only would he be getting in on the ground floor of a program moving up to the FBS, but he'd get to learn from Moglia, who was unique in the world of coaching. Moglia was a master at delegation, he thought rules were silly and he had a holistic approach to developing players, giving up 30 minutes of practice each week in order to teach life skills. In advance of the 2016 election, the team held mock debates.

While Chadwell understood how lucky he was to be a head coach at 39 years old, he couldn't pass up the opportunity to expand his horizons. It was difficult breaking the news of his departure to his Charleston Southern staff and players, he said. He can still remember people telling him he was making a mistake. But he wanted to grow.

If only he knew what he was getting into. Moglia's health had been steadily deteriorating for two years. The cough Moglia believed was a simple case of allergies never went away, and shortly after Chadwell got to campus, Moglia started struggling to breathe.

After countless X-rays and exams, Moglia finally got a proper diagnosis: He had mold in his lungs. His doctor told him he was at a tipping point. Seek treatment immediately and he'd be able to live a normal life. Push ahead, his condition would get worse, treatment options would be limited and he'd need an oxygen tank to survive.

Right before the start of preseason camp, Moglia called Chadwell into his office and said he was stepping away. Seven months after he brought him on board as O.C., Moglia promoted Chadwell to interim head coach.

Chadwell's first concern was for Moglia's health. And then it hit him: "We got two days before everybody's supposed to get here. What in the world am I going to do?"

While Chadwell understood the mechanics of running a program -- he'd been a head coach at North Greenville and Delta State, too -- he didn't have much familiarity with the roster or the coaching staff.

Moglia acknowledged there was at least one assistant coach who let it be known he thought he should have the job instead of Chadwell -- "but we shouldn't get into that."

What's more, Chadwell had no way to gauge what effect the move to FBS would have.

"I knew as a head coach there were so many things that didn't really go well from a details perspective," he said. He was worried about the team's lack of depth and players being able to grow along with the level of competition. "And I'm like, 'You know, we're in for a long season.'"

Coastal went on to lose nine straight games, but Chadwell said that airing-of-grievances meeting helped to turn things around. Not everyone agreed with the direction of the program and more than a dozen players would transfer. But there was a spark as Coastal went on the road and nearly upset Arkansas. Then the Chanticleers beat Idaho and Georgia Southern to end the season on a two-game winning streak.

Chadwell said he didn't give the quarterbacks the time and attention they deserved.

Moglia came back and coached the 2018 season, letting Chadwell settle in as O.C. and do what he came to Coastal for in the first place: to learn. Chadwell said it was eye-opening to see how Moglia operated -- how he managed staff and how he handled players. Communication was everything.

Chadwell said he figured out how to prioritize, taking the most important problem and solving it before moving on to what's next. And he figured out where he needed to focus his attention with players -- "I don't need to be strict on X because it doesn't matter in winning and losing," he said. "This is what matters."

So when Moglia sat him down after going 5-7 in 2018 and said he was leaving for good this time, Chadwell didn't have that, "What in the world am I going to do?" feeling again.

The 2017 season had taught him a valuable lesson.

Jahmar Brown takes it in for the score to pad Coastal Carolina's lead after Jackson Baltar mishandles the snap.

IT WAS DECEMBER 2021, late in the evening after the final practice on campus before the team would head to Orlando, Florida, to play Northern Illinois in the Cure Bowl. Players showered and changed. Carter, now a sixth-year senior, gathered his things and prepared to head home w