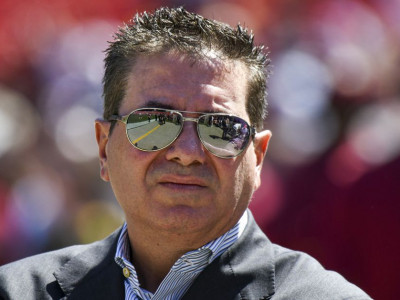 The Washington Commanders are football’s most humiliating franchise thanks mostly to the incredible incompetency of owner Daniel Snyder. Even after finally leaving their racist mascot name behind, the artists formerly known as the Washington Football Team still struggle to do anything right.

So far this offseason, a House committee concluded an investigation that saw Snyder attempted to discredit legitimate allegations of sexual harassment in the workplace with his own shadow investigation, tried to intimidate witnesses with private investigators, and underreported revenue to visiting teams. Snyder also allegedly dodged a congressional subpoena by setting sail in his super yacht so he couldn’t be served.

On Friday, the Commanders tried to earn some goodwill amongst one of the league’s most passionate fanbases by announcing a new seven-night fan cruise. Yes, a Caribbean cruise from the same team owned by a man who set sail in international waters to avoid a congressional subpoena!

As part of the seven-night excursion, guests will have the opportunity to partake in Commanders-themed events and activities, including meet-and-greets, Q&A’s and photo opportunities, trivia, karaoke, dancing and more, all while enjoying the company of up to 30 Washington Legends. Additional Legends will be announced closer to the cruise departure date.

“As an organization, it is important to us to provide Commanders fans with the best fan experience possible — whether that be at FedExField or across the Caribbean,” said Commanders Chief Partnership Officer Ryan Moreland. “Having the best fans in football join dozens of players who have shaped the history of this organization in this unforgettable experience is central to our mission of seeking out exciting and impactful partnerships, and we thank First Class Cruises for helping to bring this unique experience to life for our fans.”

The “team legends” are headlined by Joe Theismann, Doug Williams, Dexter Manley, Jordan Reed, and Santana Moss. But that’s burying the lede. Also coming on this fan cruise is none other than world famous boat party aficionado Fred Smoot!

Here’s a refresher on the Smoot’s role in the Vikings’ famous “love boat” scandal for those not old enough to remember.

There’s something that feels incredibly slimy about going on a seven-day Caribbean cruise with a franchise that was accused of sexual assault at the highest levels of the organization. The fact that the Commanders announced this just after the Snyder set sail on his own yacht to avoid subpoena makes it even more strange and tone deaf. The cruise ship Washington is using, the Harmony of the Seas, also had a major Covid outbreak earlier this year.