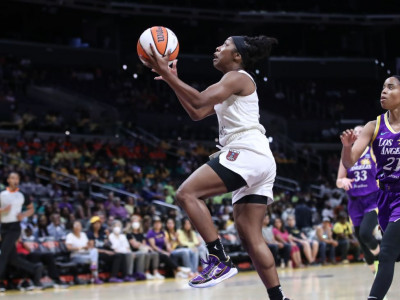 Each day of the WNBA season, our team of fantasy and betting experts breaks down every game on the slate, making note of everything from injuries and lineup changes to recent trends and more.

All odds are provided by Caesars Sportsbook. Times are ET.

Here's what to look for during today's slate:

Play the No. 1 Fantasy GameReady for kickoff? Sign up now to play with friends and family. Get started >>

Ready for kickoff? Sign up now to play with friends and family. Get started >>

Fantasy Need to Know: Despite Liz Cambage being the Sparks' most hyped offseason addition, Nneka Ogwumike was the team's most consistent fantasy option. In five of her last eight games, she scored 30 or more fantasy points. Ogwumike, Brittney Sykes, Jordin Canada and Katie Lou Samuelson (available in 65% of leagues) should be started in fantasy leagues. Los Angeles is ranked 10th in offensive rating (97.7) and 11th in defensive rating (105.1) as it attempts to snap a five-game losing streak.

Rhyne Howard has certainly exceeded fantasy managers' expectations during her rookie season. Having the ability to contribute in multiple statistical areas has allowed Howard to average 30.3 fantasy points per game for a Dream team that is stout on defense, but ranks 11th in offensive rating. Howard and Cheyenne Parker are the Atlanta players who belong in your lineup. Because Tiffany Hayes is out with an ankle injury, Aari McDonald (available in 64% of leagues) and Kristy Wallace (available in 96.6% of leagues) are very good streaming options.

In this matchup, the Dream are the better team overall. Atlanta is 7-3 against the spread over the last 10 games. The Dream should cover.

Fantasy Need to Know: Following wins over the Storm and Aces, the Mystics have won nine of their last 12 games. Throughout the season, Elena Delle Donne has been their top option averaging 30.2 fantasy points per game. For Friday's game against the Sky, she will rest. Myisha Hines-Allen will most likely replace her in the starting lineup. Hines-Allen, Ariel Atkins, Natasha Cloud, Shakira Austin and Alysha Clark (available in 52.6% of leagues) belong in fantasy lineups. The Mystics will need to bring their "A" game against the Sky, who just lost by six points to the Wings on Tuesday, one of their eight losses this season.

Candace Parker has been the top fantasy option for the Sky this season. Due to an illness, Parker missed the two previous games, but is likely to receive her usual workload against the Mystics. The Sky rank third in offensive rating (104.9) and fifth in defensive rating (98.3). Parker, Emma Meesseman, Courtney Vandersloot, Kahleah Copper, Allie Quigley and Azura Stevens (available in 38.6% of leagues) should be in your lineups.

In the league, the Sky and Mystics are two of the best teams. Both are trying to gain an advantage in playoff seeding. Matchups like this are always competitive. In 10 of the Sky's last 16 home games, the total has gone over.