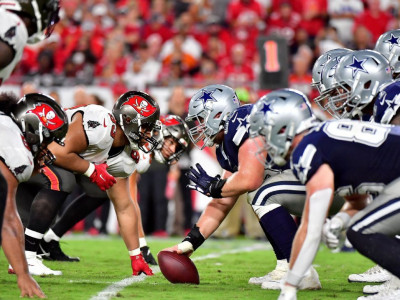 An offensive line can make or break a season. So how does every team's unit look heading into the 2022 season?

We ranked all 32 teams' lines by combining our predicted pass block win rates (PBWR) and run block win rates (RBWR) for this season, which are based on the past performance of each projected starter -- according to Mike Clay -- over the past two seasons. Rookie starters are assumed to be below average because that is historically what they usually are, even the first-rounders. Players who have played but only in small amounts have their previous win rates regressed toward a below-average level.

Then we averaged those pass and run block ranks with a 60/40 split favoring the passing game, based approximately on how much PBWR and RBWR correlate with a team's expected points added per play. RBWR has a higher impact on running EPA per play than PBWR does on passing EPA per play, but the passing game is more important overall. That weighted average produces our overall offensive line rankings. Let's jump in, starting with two teams with Super Bowl aspirations.

It's hard to imagine an investment in the offensive line going much better than what the Chiefs did a year ago. That's most notable on the interior, where they drafted or signed the No. 1 center in pass block win rate in Humphrey and Nos. 1 and 2 guards in Thuney and Smith. They were home run moves and particularly remarkable considering Smith was a sixth-round pick.

Note the asterisk above, because this ranking is working under an extremely precarious assumption of health from both Bakhtiari and Jenkins.

Bakhtiari is particularly concerning, given that he missed almost the entirety of 2021 and then underwent another procedure on his left knee this offseason to address lingering concerns. But he is an elite player when on the field.

Jenkins, who is recovering from a torn ACL last season, is also a high-end and versatile offensive lineman. Green Bay's line is in good shape if they're both on the field -- but that's a huge if.

In pass protection, veteran right tackle Johnson anchors the unit, with a 95% PBWR last season that ranked second among tackles. But in run blocking, this team has a slew of elite players. Mailata, Dickerson and Kelce all ranked in the top five for their positions in RBWR in 2021.

Turner signed only a one-year, $2.5 million deal this offseason despite PBWRs of 92% (11th overall at tackle) in 2021 and 94% (third) in 2020. Bolles was better in pass protection two years ago, so the model's best guess is a bit of an improvement off his 89% PBWR last season that ranked just 31st.

Stanley was once a top-seven tackle in both run blocking and pass blocking, but with only seven games played over the past two seasons, the model is no longer banking on him as elite. Free agent signing Moses upgrades the right tackle position in terms of pass protection (91% PBWR last season, 16th best among tackles) but is a downgrade from Alejandro Villanueva in the run game. Powers was exceptional in run blocking last season, as was Zeitler in pass protection.

Pugh was quietly a top-five pass-protecting guard last season, a boost to this line's forecast. Beachum, on the other hand, took a pretty big step back with an 88% PBWR that was 35th among tackles after a long history of performing quite well in the metric. Because Beachum was better (92%) two years ago, the model is guessing there will be some improvement from him at right tackle.

Find someone who loves you as much as run block win rate loves Washington's offensive line. That remains true even after the loss of No. 1 run-blocking guard Brandon Scherff to Jacksonville in free agency. Norwell, who came from Jacksonville, ranked seventh in the same category. Roullier didn't qualify last season but would have been the top-ranked run-blocking center if he had -- and he ranked second in 2020.

Wills Jr. is indicative of the Browns' substantial split between the run and pass game. He ranked 14th in pass block win rate last season among tackles but 64th (out of 70) in the run game.

The guards are a strength of this line. Both Bitonio and Teller were top-10 in pass protection and above average in run blocking last season.

A banged-up Nelson had a down year for him in 2021, which was still very strong. He was 12th and 13th in PBWR and RBWR, respectively. A healthy Nelson obviously is better than that.

Smith at right tackle turned into a very reliable part of the offensive line last year, too. He improved from 30th in PBWR in 2020 to fourth in 2021. Until he does that for two years in a row, the model won't fully buy in, but it's still an encouraging sign for the Colts' line.

The Patriots lost two fairly strong guards this offseason in Shaq Mason and Ted Karras -- they were ninth and 11th in PBWR last season, respectively, with Karras also finishing 14th in RBWR. But the versatile Onwenu is a solid replacement, even though the model will assume Strange is below average -- as it does for all rookies.

This is a pretty stunning rank for the Bears' offensive line, but they have a few things going for them. Reiff and Schofield -- late additions just before training camp -- help bolster the line. Borom, a fifth-round pick a year ago, posted a very solid 90% PBWR last season in 10 games, 21st among tackles. And Patrick should be an asset in the ground game after ranking third in RBWR among centers last season with the Packers.

The drop-off from the retired Andrew Whitworth to virtually any replacement was always going to be steep. The veteran tackle recorded a 94% pass block win rate, third best among tackles and best among left tackles, in his final season of play. But Noteboom has potential. He qualified at tackle in 2020 and ranked 17th in PBWR that year. And he had a 96% PBWR against the Bucs in the divisional round of the 2021 playoffs when he filled in for Whitworth.

Over his career, Howard has recorded an 89% pass block win rate when playing tackle -- an average to slightly above-average number. He and Tunsil can make for a decent tackle pairing.

The Panthers' offensive line has been a liability in recent seasons, particularly in pass protection. So a middle-of-the-road ranking is solid progress after investment into the position group. Bozeman, a free agent signing this offseason, trailed only Humphrey in PBWR among centers last season.

Tom Brady's quick release and sack/pressure avoidance always make his offensive line look good. It's a decent group but not elite because of a pass-protection weakness at left tackle in Smith, whose 81% PBWR ranked 61st out of 68 qualifying tackles last season. He ranked 51st in 2020.

Hainsey stepping in after Ryan Jensen's injury means the model assumes an approximately rookie-level starter at center for the Bucs since Hainsey barely played in 2021.

The Niners are of course anchored by Williams, but losing Laken Tomlinson hurts, and PBWR has seen McGlinchey as below average in each of the past two seasons.

Everyone has a rough time against Aaron Donald, but no one more than Brunskill. He has surrendered a 54% PRWR to Donald over his career, the highest of any player with at least 15 pass-rush plays with a win or loss vs. Donald since 2017.