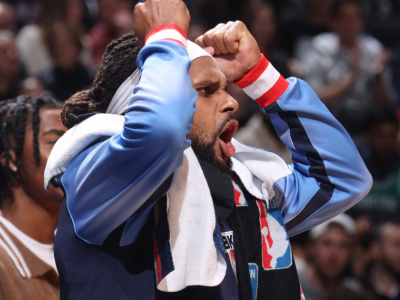 Despite the turmoil in Brooklyn, Australian Patty Mills is running it back.

The Aussie guard, one of the best 3-point shooters in the league last season, has re-signed on a two-year, $14.5 million deal to return to the Brooklyn Nets, according to Adrian Wojnarowski of ESPN.

The news comes just days after Mills opted out of the final year of his deal worth $6.2 million, but his agent immediately added that Mills had not ruled out a return to the Nets.

Mills signed with the Nets last summer with the intention of being a complementary piece around Kevin Durant and point guard Kyrie Irving. However, due to Irving's strong beliefs on the Covid vaccine, Mills ended up playing heavy rotation minutes, especially during the first half of the season.

Mills appeared in 81 games with a career-high 48 starts and averaged 11.4 points and 2.3 assists while shooting 40.8 percent from the field and 40.0 percent from three-point range. He attempted an average of seven three-pointers per game, the most in his career.

Even though Mills had a fantastic season, he will be 34 by the time the new campaign tips off, so his new deal gives him an extra year, and a slight increase in salary, too.

He has obviously taken to living in Brooklyn and is counted on as a veteran leader among the playing group. Especially more so with fellow Australian Ben Simmons, who is still yet to play a game for the Nets since being acquired in a trade for James Harden mid-season.

When Simmons was traded to the Nets, it was Mills who took on the responsibility of publicly supporting his fellow Aussie.

"I've got his back," said Mills. "I've always had his back and now I have an opportunity to be with him."

With the Irving situation now resolved finally (we hope!), Mills' role should be more clearly defined moving forward as well. The Nets will surely make more moves, and the Kevin Durant situation now needs to be taken care of, but getting Mills, who is able to spread the floor thanks to his reliability as a 3-point threat, on a cap-friendly deal is huge.

Mills' new deal with the Nets will pay him $7.25 million per season.