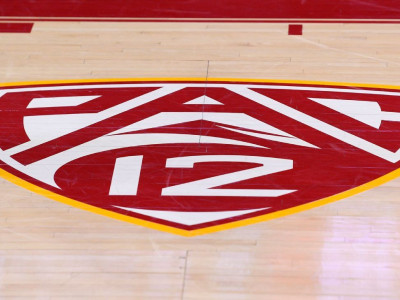 Just when you thought the conference realignment carousel might have come to rest, the USC Trojans and UCLA Bruins sent it spinning out of control again. Thursday's report revealing USC and UCLA's intention to join the Big Ten Conference by 2024 sent another round of shock waves through the college sports landscape, an impact potentially similar to the fallout of the announced departure of Oklahoma and Texas from the Big 12 to the SEC last summer.

Though football will undoubtedly be the main focus in the USC-UCLA story, the movement of the two Los Angeles-based universities will have a significant impact on other sports, including men's and women's basketball. In UCLA, the Big Ten would be gaining the school with the most national titles in NCAA men's basketball history (11). USC, which won the 1983 and 1984 national titles in women's basketball, was one of the first major brands of the NCAA women's game. And that's before you get to the impact on the schools left behind, including outstanding programs at Arizona (men's and women's) and Stanford (women's) that look set to watch their conference become weakened.

ESPN's team of Jeff Borzello, Joe Lunardi, Myron Medcalf, Alexa Philippou and Mechelle Voepel discussed the high-level basketball implications of the moves for the schools, the conference they're reportedly leaving and the league they intend to join.

Simply put, there is no Pac-8, Pac-10 or Pac-12 without UCLA (and, to a lesser extent, USC). The Wooden dynasty built West Coast basketball and can never be replicated in the modern era. The history, the championships and the geography are so unique as to be irreplaceable.

Think about it this way: The coming hole in the Big 12 from the departure of Texas and Oklahoma is seismic. A loss of the L.A. schools by the Pac-12 is two or three orders of magnitude greater. We're talking the ACC without Duke and North Carolina or the SEC without Alabama and Auburn.

From a purely basketball perspective, it is hideous to even imagine a power conference with no Southern California footprint and even more distressing to speculate on the next set of dominoes to fall. Do the Pac-12 survivors make a basketball-only play for Gonzaga? With the geographic seal effectively broken, do the Zags instead revisit a coast-to-coast Big East of more like-minded institutions?

As for historic impact in men's basketball, no right-thinking person could argue the Big Ten is a good thing for the Bruins or Trojans. Is either going to outgun the Michigan States and Indianas on a year-in, year-out basis? And the example of Nebraska football sliding toward irrelevance in the Big Ten is a not-so-insignificant corollary.

The whole thing strikes me a little like golfers bolting the PGA Tour for guaranteed millions elsewhere. If bank accounts are the priority, fine. But if doing the right thing in the long run actually matters, this ain't it. I just hope I live to see the day when major college football breaks away into a separate professional entity.

In the meantime, the collateral damage to college athletics overall is mind-boggling. As is the short-term thinking at UCLA and USC. And, while we're at it, say good night to the Pac-12 as we knew it. -- Lunardi

Men's: It's obviously a significant boost for the Big Ten, although the league already landed nine NCAA tournament bids in each of the past two seasons and is regularly one of the two or three best leagues in the country. Its power has come mostly due to its depth, but the addition of UCLA in particular should help it maintain a consistent spot near the top of the national rankings -- and raise the Big Ten's hopes of winning a national title for the first time since 2000.

The Bruins add tradition, they add blue-blood power and they add a program that appears destined to hover around the top 10 for several years. Mick Cronin is recruiting five-star talent regularly and it's hard to see that changing soon. USC has won at least 21 games in six of the past seven seasons, gone to four of the past six NCAA tournaments and made an Elite Eight run in 2021. From a basketball perspective, the Trojans won't be the headline of this realignment move -- but under Andy Enfield, they've been as consistently good as any Pac-12 team.

I think the fit is a huge boost for the Big Ten's brand. UCLA and USC will add some sexiness to the league. Combining Los Angeles with the Midwest, bringing sunshine to a cold-weather league during the grind of conference play? That's a win. The geographical implications will have an impact on the recruiting trail for Big Ten schools. It will be easier for those schools to go into California, to go to the West Coast and get players -- or at least it will open up those avenues a bit more. -- Borzello

Women's: The Big Ten has only one champion -- Purdue in 1999 -- in the NCAA women's basketball tournament, which began in 1982. Maryland is the Big Ten's most recent participant in the women's Final Four, in 2015, when the Terps were in their first year away from the ACC. In short, the Final Four, let alone NCAA titles, has been a sore subject in Big Ten women's basketball.

Some of the league's programs have made breakthroughs in recent years, though. Michigan went to the Elite Eight for the first time this past season, and Indiana did the same in 2021. Still, the Big Ten has not been a league you expect to see in the season's final weekend. There are programs that, save for a very few bright spots, have consistently struggled, like Illinois and Wisconsin. Others such as Purdue, Minnesota, Michigan State and Penn State are past Final Four programs that last season were in the bottom half of the league.

Maryland was the 2006 national champion, and the Terps are always going to be competitive, even though they've been disappointed by some of their recent NCAA finishes. Iowa was a No. 2 seed last season and traditionally is a pretty good team that typically hits its head on the glass ceiling of the second weekend of the tournament, if not before (the Hawkeyes lost in the second round this past March). Iowa's only Final Four was in 1993. Rutgers has been to the Final Four twice, most recently in 2007, and is now under new management with Coquese Washington taking over after longtime coach C. Vivian Stringer retired. Ohio State is usually very competitive in the Big Ten, but like Iowa, its lone Final Four was in 1993.

So what can UCLA and USC bring to a conference that hasn't had a title to celebrate in this sport in 23 years? Kind of the same frustration of being good, but not quite good enough. UCLA is in the running with Florida State as probably the best programs in the NCAA era to not reach the women's Final Four. The Bruins won the AIAW championship in 1978, and they have been a competitive program under coach Cori Close the past several years. But they are still waiting for their NCAA Final Four breakthrough.

USC won two NCAA titles, in 1983 and '84, and went to the 1986 Final Four, but that was all before the Pac-10/12 started sponsoring women's sports in the 1986-87 season. USC hasn't won a conference regular-season title since 1994, Lisa Leslie's senior season. That was also the last time USC made it past the NCAA tournament second round. USC has had some of the greatest players in women's basketball history, including Cheryl Miller, Cynthia Cooper, Leslie and Tina Thompson. The Trojans are entering their second season under coach Lindsay Gottlieb, who does have Final Four experience, having led Cal to the national semifinals in 2013. In terms of what the Los Angeles schools bring right now to the Big Ten, it doesn't necessarily put the league any closer to another Final Four appearance, but also doesn't take it further away. -- Voepel

Men's: The SEC secured 31 bids over the past five NCAA tournaments. The Pac-12 secured just 18 over that same stretch, and USC and UCLA claimed seven of those 18. The Pac-12, in men's basketball, had already been fighting to maintain its "Power 6" perch in recent years. Gonzaga is widely acknowledged as the best program on the West Coast, and some of the top West Coast prospects have recently ignored Pac-12 schools to compete across the country. Now, the Pac-12 moves forward without USC and UCLA, which will cost it two of the four reasons (add Arizona and Oregon) that it remains a relevant Power 6 conference.

Without USC and UCLA, the Pac-12 will lose two of its best programs, its largest city and its most nationally recognizable brands. Players in the Pac-12 not only picked USC and UCLA because of their combined history and respective legacies, but league opponents enjoyed the opportunity to compete against the Bruins and Trojans on two of the biggest stages in college basketball. That was an important element of the Pac-12's appeal. And it's gone now. Without UCLA and USC, the Pac-12 is more closely aligned with the Mountain West and the American in men's basketball than it is with the Big East, Big 12, Big Ten, SEC and ACC. There will be years when this league, as it stands now, is a one-bid league. I am not convinced Arizona and Oregon can stop the decline of the Pac-12 that had commenced years before USC and UCLA decided to make a move. -- Medcalf

Women's: In recent years, UCLA has made more noise than USC in the Pac-12 despite the Trojans' storied legacy, although neither team broke through to dethrone Stanford and, to a lesser extent, Oregon. UCLA last won a Pac-12 tournament title in 2006, USC in 2014, and neither has earned the regular-season conference crown since 1998-99. UCLA has been a consistent NCAA tournament team over the past decade, though the Bruins boast just one appearance past the Sweet 16 this millennium, in 2018. But if there's some solace for the Pac-12, it's that it still managed to send six teams to the 2022 Big Dance, despite UCLA missing March Madness after a down season riddled with injuries.

That said, expectations have been high that both programs could be turning a