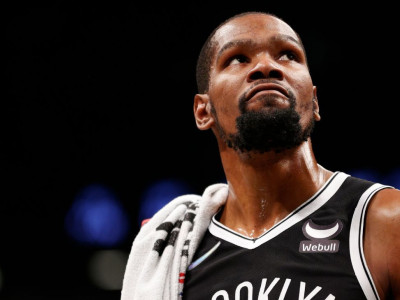 In a decision that could transform the NBA for years to come, franchise star Kevin Durant has requested a trade from the Brooklyn Nets on Thursday, his business manager Rich Kleiman told ESPN's Adrian Wojnarowski.

Not only is it incredibly rare for a player of Durant's caliber to be moved in a deal, but what makes him all the more valuable as a trade chip is that he signed a four-year contract extension that kicks in this week -- meaning that a team that acquires Durant will know they'll have him through 2026.

To that point, more than half the teams in the NBA have already inquired about what it will take to get Durant from Brooklyn, sources told Wojnarowski -- just one of many reasons why the Nets will be looking for a potentially historic return for him in a deal.

Durant's decision to ask for a trade is the pinnacle of a week of uncertainty that has surrounded the Nets, ever since the friction between the franchise and Kyrie Irving surfaced last week.

Irving eventually opted into the final year of his contract after being unable to find a suitable sign-and-trade for the Nets to make from his preferred list of destinations -- one that included the Los Angeles Lakers, LA Clippers, New York Knicks, Heat, Dallas Mavericks and Philadelphia 76ers.

Of those teams, however, only the Lakers were interested in giving Irving a max contract, sources told Wojnarowski -- and they didn't have any package to offer the Nets that was appealing enough to get a sign-and-trade deal done.

He and Irving had no contact with the Nets after Irving opted into his $37 million deal on Monday, and a sense of inevitability existed that Durant would eventually ask for a trade, sources told Wojnarowski.

Now, though, the focus has shifted to the 33-year-old Durant, and the possibility of one of the greatest players in the sport -- a 12-time All-Star and four-time league scoring champion -- being available with four years and nearly $200 million left on his deal.

This moment comes virtually three years to the day that Durant and Irving jointly announced they were coming to Brooklyn together as free agents. Presuming their partnership in Brooklyn has run its course -- the two of them played a combined 58 games together (including playoffs) across three seasons, including one in which Durant was recovering from a torn Achilles.

During that timeframe, the Nets won a single playoff series.

Brooklyn started this past season with Durant, Irving and James Harden, and was, in the eyes of many observers, the favorites to win the NBA championship. Instead, the Nets finished with a 44-38 record, good for seventh in the Eastern Conference. After escaping from the play-in tournament, they were swept by the eventual Eastern Conference champion Boston Celtics in the first round.

Durant averaged 29.9 points, 7.4 rebounds and 6.4 assists this season, but he saw action in just 55 games during the regular season as he recovered from an MCL injury.

If the two-time NBA champion and three-time Olympic gold medalist is traded, it would be the highest scoring average by any player who started the next season on a new team since Moses Malone was traded from Houston to Philadelphia following the 1981-82 season, according to ESPN Stats & Information.

Sportsbooks adjusted the odds to win next season's NBA championship upon news of Durant's trade request, with the Suns becoming the title favorites.

In a separate piece of business Thursday, the Nets agreed to a deal with the Utah Jazz that saw Brooklyn acquire forward Royce O'Neale in exchange for a 2023 first-round pick, sources told Wojnarowski.

The pick will be the lesser from among Brooklyn, Houston and Philadelphia's selections, sources told Wojnarowski.

O'Neale, 29, averaged 7.4 points and 4.8 rebounds in his fifth season with the Jazz this past season, and is under contract this year plus a non-guaranteed year for the 2023-24 season.