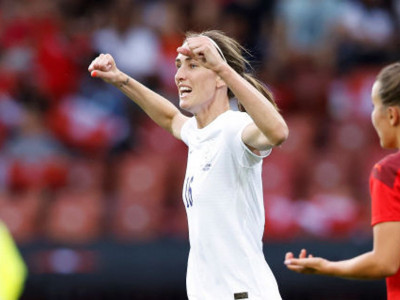 All the talking points as England sign off their Euro 2022 preparations with a 4-0 win over Switzerland, while Sarina Wiegman says her side are in a "very good place".

Once again, England's strength in depth was manifest. So much so that, for a third consecutive game, their second-half performance completely eclipsed the first.

Undoubtedly, all three opponents have suffered significant drop-offs in the second 45 minutes, but that is, in part, due to England's energising impact players.

All three warm-up games have produced a stalemate entering the interval, with a total of 10 goals scored after the break - seven of those have been scored by substitutes.

The bench is having its desired effect but getting the right blend in the starting line-up is more complex than ever. In every friendly played across June, England's most influential players have often started on the bench.

That isn't necessarily a fault. Sarina Wiegman has created an environment whereby all players feel valued, and the competition for places speaks to the hunger and desire of individuals, who are vying for more positions than the manager is able to give.

Arguably, it does give England an added element of surprise - the team doesn't pick itself, it's unpredictable. Chloe Kelly came off the bench to great effect against Switzerland, assisting Jill Scott's goal, but is a capable starter. The same can be said of Ella Toone's contribution against the Dutch.

Women's Euros: All you need to know

Healthy rivalry is good for morale - although it's still unclear what England's best XI is. Or rather, which 11 players best complement one another from the get-go.

Certain names - Leah Williamson for example - are nailed on to start, but question marks remain. Even in Williamson's case, such is her versatility, it's hard to know where she is best placed in this extremely talented group.

What is for sure, based on England's dominance and control over games under Weigman, is that this side are well equipped to go deep in the competition. What may be the difference, however, is whether decision-making around key personnel, in key moments, can make England the complete tournament package.Laura Hunter

Given Ellen White's scoring prowess at international level - a record that is hard to argue with - you would think there was little jeopardy left in the No 9 role.

However, White's pre-tournament preparations hit a stumbling block last week when she tested positive for Covid-19. It has presented her supporting cast with an opportunity.

Alessia Russo has grabbed her chance with both hands. Having impressed from the bench against the Netherlands last week, she was rewarded with a starting place against the Swiss.

It paid off. She was in the thick of the action from the off, performing as the link between England's attacking foursome. Her runs were intelligent, but more than that, her movement aided others. Unselfishly, she invited others to join attacks and wasn't scared of doing the dog work - hustling to win the ball back. She was then compensated with a goal of her own.

She rounded off a wonderful flowing move, involving Leah Williamson and Rachel Daly, to give England their advantage. The finish was considered, deliberate. Manchester United's most prolific player across 2021/22, she's got all the potential to be equally as influential for England this summer.

At 23, her energy is infectious and is perhaps more dynamic than White - 10 years her senior. Whether it's from the bench, or from the start, Russo has plenty to offer this Lionesses team and should be utilised.Laura Hunter

Three games, three wins, no major injuries. If Carlsberg did championship warm-ups, that wouldn't be far off as much as you could ask for.

England's trio of victories ahead of Euro 2022 was not the most remarkable on paper, with Belgium and Switzerland in particular ranked just inside the world's top-20 sides and unlikely to make deep runs into the tournament when it rolls around next week.

But their 5-1 thrashing of Netherlands, in which they had to come from behind for the first time since Wiegman took charge, was more of an eye-brow raiser - not only beating the reigning European champions, but taking them to the cleaners.

The holders' preparations had been far shorter than their opponents and Vivienne Miedema was not introduced until after the hour mark as they looked to regulate their players' minutes, but the psychological boost of such a commanding win remains.

If it sounds like there could be a danger of England peaking too soon, it's not the case - for most of the first hour against Switzerland in this final warm-up game, they needed more tempo in their game and creativity in midfield.

Of the 12 goals they have scored across their warm-up games, only two have come before half-time. And when faced with a pressing opponent they have not often faced in the Netherlands last Friday, they found life uncomfortable at times and will need to be better in those situations should they reach the latter stages of this tournament.

There is still plenty for Wiegman and England to work on over the next six days ahead of facing Austria. But there is plenty of optimism to take from a clean sweep of victories going into the tournament too.Ron Walker

After England toiled for almost an hour to find a breakthrough in Zurich, Sarina Wiegman said she felt her side still had work to do ahead of Wednesday's Euro 2022 opener with Austria.

But she admitted her side, who have won 12 and drawn two of her 14 games in charge and conceded only three goals in that time, are in a "very good place" ahead of the tournament.

She told ITV: "It was a very good result, we scored a lot of goals in the second half which showed we have a very fit team. They got tired, we brought on some substitutes and it also showed again that we don't play with 11 players, we have so many more in our squad and can make a change in the second half.

"We started well, had three big chances at the start of the game, and it would've been easy to score those goals, but when we didn't they got some chances and we have to do a little better at that.

"We had to speed up the game in the first half, the ball tempo was too low, and then they can organise all the time. We did that better in the second half and they got more tired.