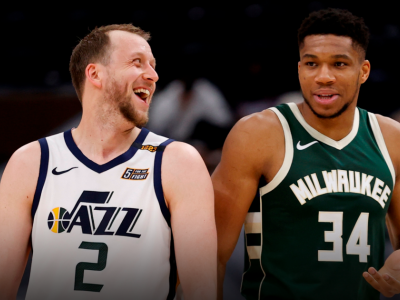 Joe Ingles will continue his championship pursuit in Milwaukee.

The Aussie forward — one of the best sharpshooters in this year's free agency class — agreed to a one-year deal with the Bucks.

The news came from an unlikely newsbreaker: Ingles's wife, Renae.

BREAKING NEWS:Sources very close to free agent @Joeingles7 can confirm that he has agreed to a one-year deal with the Milwaukee Bucks.CEO of the house, Renae Ingles, is thrilled for Joe and their family.Joe himself, is said to be very bucking happy.#nba #nbanews pic.twitter.com/4yra9gQst3— Renae Ingles (@RenaeIngles)

After suffering a torn ACL this past season with the Jazz, the market wasn't ripe for a long-term deal for Ingles who turns 35 in October and is entering his ninth NBA season. In Milwaukee, Ingles will have the luxury of taking his time in recovering from the knee injury which ended his 2021-22 campaign after just 45 games.

Ingles brings a much needed skillset to the Bucks who can never use enough shooting next to superstar forward Giannis Antetokounmpo. Although Ingles struggled from downtown last season prior to his injury, connecting on a career-worst 34.7 percent from the 3-point line, he's a career 40 percent shooter from long range and should benefit immensely playing off of the two-time MVP.

Beyond shooting, Ingles brings more playmaking and size to the Bucks. Milwaukee assisted on just 57 percent of its made shots last season which ranked just 28th. Ingles has averaged at least five assists per 36 minutes in each of his last five seasons and gives the Bucks another ball handler to initiate half-court offense.

Ingles made $13.0 million last season with the Jazz. He was traded to the Portland Trail Blazers at the deadline but did not suit up for them as he was recovering from a torn ACL.