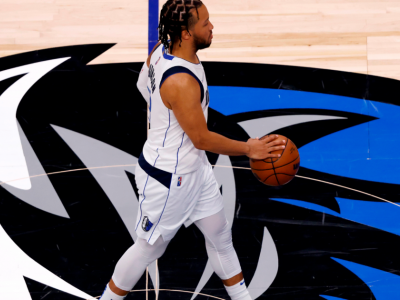 Back in April, Rick Brunson warned NBA teams that if they wanted his son in free agency this summer, it was gonna cost.

Brunson scored his first major payday in free agency and became the Knicks' new starting point guard in the process.

Brunson had a breakout year in 2021-22 after a disappointing playoff performance against the Clippers in the previous season. He averaged 16.3 points on 50.2 percent shooting, 4.8 assists and 3.9 rebounds last year in his fourth NBA season.

During the Mavs' first-round playoff series with the Jazz this season, Brunson averaged 32.0 points, 5.3 assists and 5.3 rebounds to carry Dallas to a 2-1 series lead when Luka Doncic was sidelined for the first three games of the series.

Brunson had played his entire NBA career with the Mavs, who selected him with the No. 33 overall pick in the 2018 draft.

How much will Brunson be paid? The Sporting News breaks down his deal.

Brunson was a second-round draft pick by the Mavericks (33rd overall) in 2018 and signed a four-year, $6.1 million deal with them.

He was an unrestricted free agent this summer.

The Mavericks had the opportunity to sign him to a team favorable four-year, $55 million extension last season, but declined to do so, and didn't even get to engage in conversations, according to an ESPN report.

The Mavericks were able to offer Brunson a five-year deal worth up to $174 million, but they would have pushed them well into luxury tax territory and according to some reports, they were only willing to pay him up to $22 million per season.

That price point, per sources: a five-year deal at “more than Fred VanVleet money,” which means about $22M per year or $110M total value. https://t.co/fjAHrfcbQu— Tim MacMahon (@espn_macmahon)

Dallas was initially going to offer a five-year $106 million deal but the Knicks got Brunson on a four-year $104 million deal.

Brunson joined the Knicks on a four-year, $104 million deal, making his average yearly salary roughly $27.5 million (depending on how the deal is structured), which, as we can see from the table below, doesn't even put Brunson in the top ten highest-paid point guards in the league.

It would place around 14th on the list behind players like Miami's Kyle Lowry who is set to be paid $28.3 million next season.

Brunson still has a long way to catch up to the real big money earners in the NBA, however.