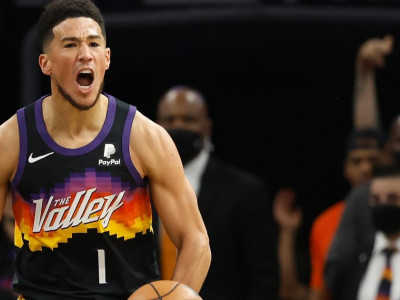 The face of the Suns franchise is staying in Phoenix, and he's becoming one of the NBA's richest players in the process.

As soon as NBA's 2022 free agency period opened Thursday, Devin Booker was announced as having agreed to a four-year supermax contract with the Suns that will keep him in Phoenix through the 2029-30 NBA season. The new deal will go into effect in the 2024-25 season.

On top of the payday, Booker was also announced as the cover athlete for NBA 2k23, per The Athletic's Shams Charania.

MORE: Analysis of every major signing, trade and new contract

The evolution of Booker into one of the game's best shooting guards has fueled the Suns' rise to the top of the Western Conference. Since the 2018-19 season, the team has improved its winning percentage each year. Over the past four seasons, Booker has averaged 26.4 points per game, the ninth-most during that stretch in the NBA, per Stathead.

Charania reported Booker agreed to a four-year, $214 million supermax extension. The deal is expected to be signed as soon as next week.

The Phoenix Suns and All-NBA guard Devin Booker are finalizing a four-year, $214 million supermax contract extension that he’s set to sign as soon as next week, sources tell @TheAthletic @Stadium.Booker will also be the cover athlete for NBA 2K23, per sources.— Shams Charania (@ShamsCharania)

Booker, 25, can become a free agent after the 2029-30 season under the terms of the extension.

NOH: How easy would a Suns trade for KD be?

This is the second major deal Booker has signed with Phoenix. In 2018, he signed a five-year, $158 million deal to stay with the Suns.

According to Spotrac, these are the expected annual salaries with the extension:

Booker's deal makes him one of the highest-paid players in the NBA.

MORE: The numbers behind Beal's monster deal with Wizards