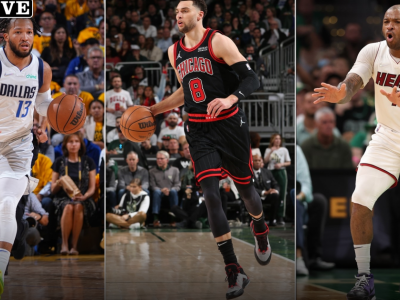 The NBA free agency frenzy is finally here. After months of speculation swirling around the biggest free agent targets and potential blockbuster trades, teams can finally start acting on their perfectly laid plans.

Once the clock strikes 6 p.m. ET on Thursday, pandemonium kicks into high gear and The Sporting News has you covered with live reaction to every major move.

Which teams struck oil and which struck out? Who overpaid to nail down their top targets and who inked valuable contributors on team-friendly deals?

Stay with us throughout the first day of NBA free agency for complete analysis.

This is a good deal for the Nets. Now they just have to play him.

Claxton is a young big who can move decently on the perimeter and protect the rim well. He gives the Nets some badly needed scheme versatility. He doesn't have a jump shot and he's a poor free throw shooter, but he is a great finisher at the rim.

Claxton only played 21 minutes per game last season for the Nets. Maybe this is a sign that he will get some more time. If so, it's well-deserved.

Brown is still sort of young -- He'll be 23 to start the season. He can kind of shoot -- He hit 35 percent of his 3's for the Bulls last year. But those positives are a mirage for those who have watched him closely.

Brown was the 15th pick in the 2018 draft. Despite the good pedigree, the Wizards and Bulls both gave up on him.

Brown is an extremely reticent and inconsistent shooter. His decent percentage came off wide open looks and very low volume. He doesn't do much inside the 3-point line. While he is a toolsy defender that can be good in spurts, he also has stretches where he inexplicably falls asleep. He's a low-feel player who can't consistently stretch the floor for LeBron James. The risk here is very low, but so is the payoff

Bagley had a great draft pedigree as one of the best high school recruits in the country and the no. 2 pick in the 2018 draft. The problem is that he hasn't played NBA basketball particularly well.

Bagley has incredible tools and athleticism, but he hasn't been able to translate that to productive play. He's had plenty of opportunities.

He's still young, and he did play a little better in his 18 games after he was traded to the Pistons. Still, this is a lot to pay a player that hasn't really done much at the NBA level yet.

Tate is one of the better young players that you've never heard of. He's not a star, but he is a stud role player that has been buried on bad Rockets teams.

Tate is one of the best defenders on the Rockets. He is always willing to put his body on the line to draw a charge. He's a heady cutter that doesn't need plays run for him in order to score. He is held back by a poor jump shot, but he would be surely be a fan favorite if he ever found his way to a contender. Perhaps that will happen on this new deal. He will be an asset on it.

Mills fulfilled a vital role for the Nets last season. He will be entering his age 34 season, but he's still one of the best shooters in the league, connecting on 40 percent of his 3's last year.

The Nets didn't have cap space or a good way to replace what they'd lose with Mills. They also don't have incentive to tank even if they trade away Kevin Durant because of the pick compensation they owe to the Rockets. For a team looking to still remain competitive, this was a good move at a low price.

Young was buried for most of last season on the Spurs' bench but finally got some playing time in a midseason trade with the Raptors. He played well for them to close the year and earned a nice payday.

How much Young has in the tank is a fair question. He'll be entering his 16th season in the league. But his game should age gracefully. He uses an unstoppable lefty hook and extreme craft to fire off passes all over the court. He's also one of the smarter defenders in the league. He's a great veteran that should help the Raptors win now.

Batum revived his career with the Clippers and had been one of the biggest value contracts in the league.

Now, Batum is being paid more in line with what he's worth. The Clippers are way deep in the tax, so good on owner Steve Ballmer for keeping one of the better 3-and-D power forwards on the free agent market.

This one is a head-scratcher for me. Dort is a nice player for sure. He's a good wing defender, which is immensely valuable in the NBA.

But Dort is a limited offensive player. He's not much of a shooter, hitting just 33 percent of his attempts last season on a massively high 7.7 attempts per game. He did average 17 points per game for the Thunder last season, but did so on poor efficiency and a terrible team. This seems like an overpay for a franchise that has been obsessed with squeezing out value wherever it can.

Boucher has been a somewhat inconsistent player for the Raptors, oftentimes facing the ire of head coach Nick Nurse.

The idea of him as a stretch big who can block some shots is extremely valuable. But he hit only 29.7 percent of his 3-pointers last season and blocked only 0.9 shots per game.

This is a lot of money to commit to a backup big man. The Raptors are betting on continued improvement from Boucher, who started playing basketball seriously at a late age but is already 29 years old when players generally stop making big jumps in development.

Coffey was one of my favorite free agency sleepers this season. He stepped in admirably as a starter for the Clippers when they were decimated by injuries, helping to keep them playing near .500 basketball.

Coffey is young, provides nice 3-point shooting, and was a decent defender last season. He's a great bench addition at a nice price for the Clippers.

Jones was a backup point guard for the Grizzlies last season, but he was still a vital part of the team and one of the best at his position in this free agency class. The team didn't miss a beat when Ja Morant was out thanks to the heady play of Jones.

This is a hefty price to pay for a backup, but the Grizzlies didn't have great options to replace him and they are entering their window of contention where they should be spending on the team.

This is an odd deal. The Magic have a glut of big men, with newly-drafted Paolo Banchero joining Wendell Carter Jr., Jonathan Isaac, and Franz Wagner. Where will Bamba find minutes in this crowded rotation?

At first blush, this seems like it may be an asset play. Perhaps the Magic signed Bamba to try and move him down the road. For now, it is a puzzling use of the Magic's valuable cap space.

Portis took a discount to come back to the Bucks last season. The Bucks have rewarded him with this deal. They'll be a tax team again, so credit goes to them for ponying up what they needed to in order to keep a vital part of their team and fan favorite.

Portis is a fiery big man who has provided a ton of spacing around Giannis Antetokoumnpo. He has defensive limitations, but those are hidden fairly well with the rest of the Bucks' defensive talent.

Simons was an extremely raw prospect when he was drafted in 2018 by the Blazers. Kudos to them for their solid player development.

Simons, who turned 23 in June, has shown that he can score at the NBA level. He averaged 17.3 points per game for the Blazers last year, hitting 40.5 percent of his 3's. His defense still needs work, but there is no doubting his shot creation skills.

Monk completely rehabbed his value last year on the Lakers. He had to sign for the minimum last season, and this is a nice reward for a good year.

Monk wasn't highly sought after last season in large part because of his poor defense. He's improved on that end, and he's always been a solid 3-point threat. This is a nice piece of business for the Kings.

Tucker played well for the Heat last season, but he's already 37 years old. He can shoot corner 3's capably, but he hardly shoots and doesn't do much else on offense.

Tucker should finally give the Sixers a viable option for a small-ball center when Joel Embiid needs a rest. They've fallen apart in previous years in those minutes. But I would be very worried about injury or decline.

Beal was the no. 2 free agent in this class behind Zach LaVine on my board. He had a down year last season as far as his shooting goes, but he's only 28 years old and this deal should carry through his prime years.

It's still not totally clear how much Oladipo is recovered from his series of nasty injuries. He played towards the end of last season and had moments where he looked like he could provide pesky defense and good outside shooting.

The cost is a little high, but on a one-year deal this is is a nice prove-it opportunity for Oladipo. The Heat also retain his Bird Rights to re-sign him if he looks unhampered by injury.

Hartenstein was my top free agency sleeper. He's not a huge name but he is a very solid center that could potentially start for the Knicks.

This is a nice piece of business for Knicks. They needed some shooting around new acquisition Jalen Brunson, and Hartenstein is a career 38 percent marksman.

Hartenstein also gives the Knicks some more great rim protection and a good roll threat to pair with Brunson.

This was a no-brainer for the Nuggets. Jokic, the reigning two-time MVP of the league, far exceeds any contract valuation that he could be paid by league rules.

The Brunson contract has been met largely with derision, and it's understandable on some level. It's a lot of money for a guy who only averaged 16.3 points per game last season and came off the bench for most of his career.

The reality is that the cap is going up, and Brunson is a very good young player who might have another gear if he's not playing alongside Luka Doncic. His new deal would put