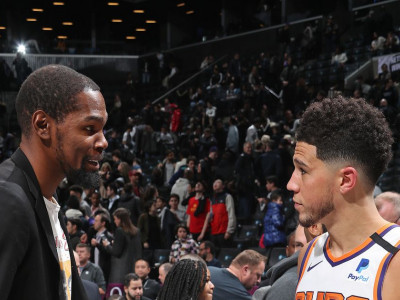 It’s just like Flex from Jersey has been tweeted and podding and covering for weeks. Now all the national guys are getting the news too.

Kevin Durant wants a trade, and the Phoenix Suns are atop his wish list of destinations.

As the Nets prepare to move one of the most valuable trade assets ever on the market, the entire roster will available to discuss in deals, sources tell ESPN. Teams have been calling on Durant, and the Nets will certainly look for a historic return on players and draft picks.— Adrian Wojnarowski (@wojespn)

On Monday, as the league prepared for Kevin Durant to potentially request a trade during the Kyrie opt-in saga, Phoenix and Miami were often mentioned as the All-Star's perceived favorite landing spots.— Jake Fischer (@JakeLFischer)

Of course, there’s some posturing from the Nets.

So that’s all come out today.

Here’s Flex weeks ago — and he’s been the only one reporting on this with actual inside info in that whole time and not in the “that would be cool” or “Suns should look at KD” way.

Give Flex his props.

Here’s May 16 — one day after the Suns lost in the playoffs.

Going to be an interesting offseason in Phoenix. Im told the Suns will have a unique opportunity to land a true Superstar who wants to be in Phoenix with Booker while allowing CP3 to take a lighter load as a 3rd option at 37. Right place at the right time situation for the Suns — FLEX From Jersey (@FlexFromJersey)

Sometimes "Unique Opportunities" come up and being in the right place at the right time means everything! Phoenix has done a great job of putting themselves in position to strike when the time is right. Alot will happen along the way but the finished product is all that matters. https://t.co/ds7ty4aBh1— FLEX From Jersey (@FlexFromJersey)

He quickly followed that up with a podcast, hinting strongly about Kevin Durant and LeBron James as being targets.

Kevin Durant has real interest in the Phoenix Suns, weather that happens now or later is the real question. The facts are if you can get a guy like KD you have to keep yourself in position by making smart business decisions along the way, Contracts, Assets and draft compensation.— FLEX From Jersey (@FlexFromJersey)

Flex is a buddy of mine I’ve had on the Solar Panel podcast many many time. He’s got real contacts in some areas of the NBA. Give him the props.

The Nets will be starting over, so they won’t want Chris Paul and the Suns won’t send Devin Booker.

But really, shouldn’t everyone else be available for the Nets, including future draft picks?

If the Nets go down in salary, they can acquire Ayton as a sign-and-trade BUUUUT as you already know from reading my work, it’s complicated because of the base year Compensation limitations.

Ayton can go out at $31 million, but only comes back as $19 million. KD is already at $42 million coming back. The Suns will have to be creative, sending more big contracts... probably also including Mikal Bridges. Sorry, but that’s how it works to acquire a Top-5 NBA player, folks.