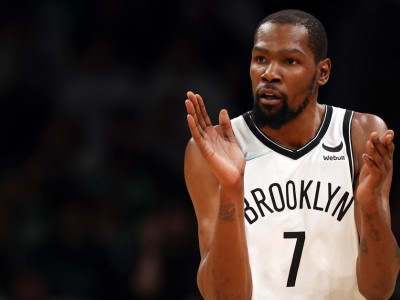 Kevin Durant has requested a trade from the Brooklyn Nets, putting one of the greatest players in NBA history is officially on the trade market. Durant is about to a start new four-year contract extension that will pay him $194 million over the course of the deal.

Durant reportedly has two teams on his preferred list of destinations: the Miami Heat and Phoenix Suns. Each team earned the No. 1 seed in their respective conference in last year’s playoffs, but failed to advance to the NBA Finals.

Rumors of Durant’s potential departure from the Nets started when the franchise refused to give Kyrie Irving the long-term, max contract he was seeking. Instead, Irving opted into the final year of his deal with Brooklyn for $36 million. Now both players are very likely to be traded this offseason and never play another game for the Nets. Durant reportedly requested a trade from the Nets because they would not give Irving the contract he was seeking, per Adrian Wojnarowski.

The Nets were the overwhelming championship favorites entering last season. Then Irving was unavailable for the majority of the year after refusing to take the Covid vaccine, James Harden demanded a trade and was sent to the Philadelphia 76ers, Joe Harris suffered a season-ending injury, and the Nets — with Durant and Irving on the floor — were swept in the first round by the Boston Celtics.

Brooklyn owes basically all of its future draft picks to the Houston Rockets because of the original Harden trade, so don’t expect the Nets to seeking a full rebuild in this deal.

We are keeping track of every Durant trade rumor in this post until he’s finally dealt. You can bet on his next destination at DraftKings Sportsbook in AZ, CO, IL, LA, NH, ON, OR, WV & WY.

Woj: “[Kevin Durant] wanted to get Kyrie Irving a long-term deal in Brooklyn. That didn’t happen.” He says that after Kyrie Irving couldn’t find a S+T, communication stopped. Plus, the Nets have been preparing for this for weeks and have already had conversations about this.— Alec Sturm (@Alec_Sturm)

Woj: “I think it’s likely that not only Kevin Durant — but also Kyrie Irving — has played his last game with Brooklyn.”— Alec Sturm (@Alec_Sturm)

According to Woj, There will be teams that will look at trading for BOTH Kevin Durant and Kyrie Irving together but the market on Kyrie is 'a fraction' of what's available for KD..."Everyone on their roster is gonna be available. They have to look at every scenario right now" pic.twitter.com/yBzHlgYi2N— Rob Lopez (@r0bato)

Windhorst says he has heard that the Lakers are the only possible destination for both Kevin Durant and Kyrie Irving to end up. Added it isn't likely but that's what he has heard. https://t.co/cJmY73Guj6— Jas Kang (@jaskang21)

"Kyrie Irving is telling everybody he plans on going to LA, meaning the Lakers as soon as he possibly can."—@stephenasmith pic.twitter.com/PTUircwl44— ESPN (@espn)

Woj says that "more than half the league has called Brooklyn about acquiring Kevin Durant".— Keith Smith (@KeithSmithNBA)

Nets reportedly have interest in both Devin Booker and Bam Adebayo, but neither can legally be rostered next to Ben Simmons due to the CBA. I get that Brooklyn would then move Simmons, but that’s yet another player (Kyrie) whose trade value is way lower than his talent.— Alec Sturm (@Alec_Sturm)

For those wondering: you can’t two players on your roster on rookie-max extensions that you’ve traded for. That’s the contract that Simmons is on, as are Adebayo and Booker.— Alec Sturm (@Alec_Sturm)

Per source, the Dallas #Mavericks are expected to heavily pursue a trade for #Nets star Kyrie Irving. Assuming they lose Jalen Brunson, that pursuit will be very aggressive.— Evan Massey (@massey_evan)

Just told the Suns are now shifting their focus to Kevin Durant. They don't want to gut the whole team to get him but that discussion is now the main priority.— John Gambadoro (@Gambo987)

Windhorst says on ESPN that the Suns will sign Devin Booker to a max extension in the next few hours. Adds that Phoenix's best offer for Kevin Durant will start with DeAndre Ayton. Windy says the Heat remain in the mix because of their picks/current players.— Jas Kang (@jaskang21)

We’ll update this story as it develops.