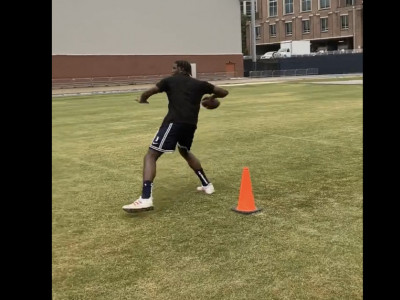 It’s been a heck of a year for Anthony Edwards. He helped lead the Wolves to the playoffs, starred in Adam Sandlers’ Hustle, and how he’s showing off a cannon of an arm on the football field.

The Atlanta native took to Georgia Tech’s practice field to throw the ball, and honestly, his arm strength is mighty impressive. It shouldn’t be that surprising, because before settling on basketball he was a hell of a youth football player in the Atlanta area. In pop warner he played quarterback, running back, and cornerback — with his rushing skills being so pronounced that at the age of 10 there was talk about him being coveted by some of the top high schools in the Atlanta area.

We know the rest of the story. Edwards decided to hang up his cleats and concentrate on basketball. Obviously it was the right choice in the end, but he’s never lost those football skills. Naturally we’re talking about an open field throw without any pressure, but it still takes skill to drop a back shoulder on a 40+ yard throw. Hell, he even showed off his speed t receiver to make a great catch.

Is there anything Ant can’t do?