The Stanley Cup got delivered to the wrong house in Denver 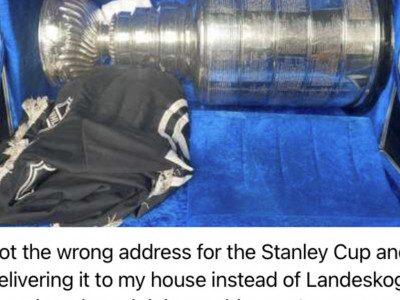 Imagine you’re home and there’s a knock on the door. You open it, curious because you weren’t expecting anyone, and standing there is a man carrying the Stanley Cup. That’s what happened to a Denver couple on Tuesday, who had a once-in-a-lifetime brush with hockey’s most-cherished prize, all because the cup handlers got lost looking for Gabriel Landeskog’s house.

Kit Karbler and his husband didn’t know what to think when the large crate was opened showing the cup. They informed the cup handler that neither of them were in fact, the captain of the Colorado Avalanche. Instead they pointed the cup handler in the right direction, knowing Landeskog’s house in the neighborhood — but not before getting to hold the cup and posting on a photo on Nextdoor.

I like to think of this as a lifehack. Players train their entire careers, sacrificing everything for a chance to hoist the trophy. Who knew all you had to do was live in a hockey champion’s neighborhood and wait until it’s delivered to the wrong house?

Naturally the handlers quickly realized they didn’t have the correct house and the Stanley Cup arrived at its intended home, but finally we found a good use for Nextdoor along the way.