GONE: Kevin Durant has asked Nets to trade him 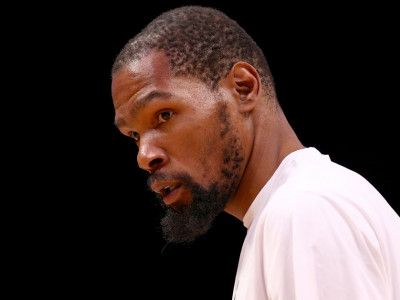 Three years to the day — almost to the hour — the “Clean Sweep” has been undone.

Both Adrian Wojnarowski and Shams Charania report that Kevin Durant has asked the Nets for a trade and the Nets have agreed to his wish...

Kevin Durant and Kyrie Irving had no contact with the franchise after Irving opted into his deal on Monday, and a sense of inevitability existed that Durant would eventually ask for a trade, sources tell ESPN. It happened today.— Adrian Wojnarowski (@wojespn)

Woj reported that KD made his request directly to Joe Tsai. He reportedly had not spoken to the Nets front office in weeks perhaps since the end of the season back in May.

The loss of arguably the game’s greatest player in his prime represents the single greatest failure by ownership and management in NBA history. After years of being a joke on the court and at the box office, the Nets acquired Durant, Kyrie Irving and DeAndre Jordan on June 30, 2019 — which Woj dubbed “the Clean Sweep” — in hopes of creating a basketball dynasty. Instead, the era never got beyond the second round of the playoffs and this year the Nets wound up being swept by Boston in the first round of the playoffs.

A culture based on player empowerment failed miserably with the franchise continually caving in to the superstars demands without a commensurate return. Only after a miserable season capped off by the sweep did Joe Tsai and Sean Marks change but by then, things were settled.

It’s fully expected that Brooklyn will also move quickly to trade Irving as well. As Brian Windhorst reported on ESPN, “If Kevin Durant is on the first train out, Kyrie Irving will be on the kaboose as far the Nets are concerned.”

How quickly? Well, Draft Kings just dropped the odds of the Brooklyn Nets winning the NBA Championship down to +5000; behind the Hawks and Pelicans.

Now, with the loss of Durant and no doubt Irving as well, the Nets are again in rebuild mode. How deep will depend on what the Nets get in return for the two superstars. Durant is under contract for another four years at $198 million while Irving recently opted in to a one year, $36.5 million player option.

The Nets are expected to retain Ben Simmons, the third player in the reconstituted “Big Three.”

Source close to the situation tells @TheAthletic that the Nets are expected to keep Ben Simmons. Some had rightfully wondered if there would be a ripple effect here on the 25-year-old's Nets future. https://t.co/2TnO6n71xI— Sam Amick (@sam_amick)

Much of the blame for the debacle will fall on Irving who in a variety of ways put his own personal beliefs above the team, most famously by refusing to get the COVID vaccine and missing all but 29 games last season. The Nets were also reportedly unhappy with Irving’s effort in the first found which one insider called “horrendous.”

However, he is not alone. Ownership and management failed to see the potential risks in switching from player empowerment to a more hardline approach or if they did see them, did not appreciate had badly things could go. Durant also. He protected Irving, his friend.

The decision by Durant, who missed six weeks to a strained MCL this season after missing all of the 2019-20 season, comes after days of speculation that he was upset with the manner in which franchise had treated Irving, deciding against giving a fully guaranteed, four year, $245.6 million deal.

Four days ago, Logan Murdock of The Ringer noted Durant’s unhappiness and suggested that the Nets could have a completely different roster by training camp. First word of the big risk came a month ago when Kristian Winfield of the Daily News reported that the Nets were opposed to giving Irving a long-term contract and risked losing Durant as well. In the ensuing risks, ESPN and The Athletic also suggested the risk was high.

Just this morning, Frank Isola, speaking on ESPN Radio, suggested the possibility that the Nets could lose Durant.

Durant himself in talking to Eddie Gonzalez of the ETCs podcast last week, did not speak about the potential risk of his leaving, saying he was out of it. Durant said he wasn’t involved in Irving’s free agency, adding, “I just let things play out and see what happens,” adding “Whatever happens, the friendship will still be there.”

Now attention will turn to what the Nets can get in return for Durant first, then Irving. Chris Haynes of Yahoo! Sports reports that Durant wants to dealt to the Phoenix Suns.

But Woj reported that the Nets will look for the best possible return wherever that takes them.

Woj added that no one on the roster is safe...

As the Nets prepare to move one of the most valuable trade assets ever on the market, the entire roster will available to discuss in deals, sources tell ESPN. Teams have been calling on Durant, and the Nets will certainly look for a historic return on players and draft picks.— Adrian Wojnarowski (@wojespn)

Zach Lowe, Woj’s ESPN colleague, said after the request was announced, said he expects “seismic haul” of assets. Indeed, there were reports Thursday afternoon that DeAndre Ayton of the Suns and Bam Adebayo of the Heat might be moving. Then, of course, there was Wednesday’s rumor of an Irving for Russell Westbrook and draft compensation exchange.

On ESPN, Woj noted, “The idea is to get All-Star players, all the available picks from teams… For Brooklyn, the leverage they have is the contract status of Kevin Durant. Because he’s under contract for four years, he has very little leverage on where he can go.”

By later in the day, Bobby Marks was previewing what he thinks Sean Marks might do...

And in fact, the rebuild got an early start when at the same time news broke that the Nets had traded their 2023 pick — the least of theirs, Houston’s and Philadelphia’s — to the Jazz for Royce O’Neal, a 6’7” wing. The trade apparently used the Nets biggest trade exception, the $11.3 million TPE acquired in the James Harden trade at the deadline.

The Nets are acquiring the Jazz's Royce O'Neal in a trade for a 2023 first-round pick, sources tell ESPN.— Adrian Wojnarowski (@wojespn)

The rebuild, and it cannot be spun any other way, won’t just involve the roster, but the coaching staff and front office as well.

Indeed, the Nets are also in the process of losing a significant number of their assistant coaches and some members of the front office. Amar’e Stoudemire, the Nets player development assistant, left shortly after the season by mutual agreement. Also, Marc Stein has reported that David Vanterpool and Adam Harrington, the director of player development and a friend of Durant’s, have been let go. Murdock specifically mentioned the Nets decision to dump Harrington as one of Durant’s more specific grievances.

Now, Durant and Irving are not long for New York and fans of the black-and-white have suffered a psychic blow.