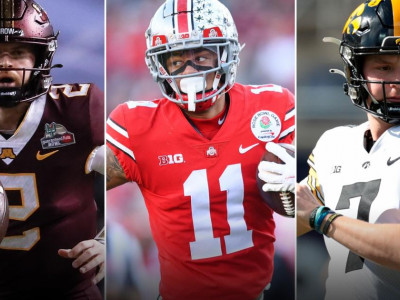 With the start of college football season getting closer, it’s worthwhile to see how oddsmakers are handicapping the power conferences. To start, we’ll be looking at the favorites, sleepers, and best long-shot bets to win the Big Ten.

If you’re interested in getting involved in the Big Ten futures markets, Sporting News has you covered. Below, we’ll break down the top teams and a couple of sleepers and long shots who could win the Big Ten championship.

Per usual, Ohio State enters 2022 as the team to beat. The Buckeyes return 14 starters off an 11-2 team that defeated Utah 48-45 in one of the best Rose Bowls of recent memory. Ohio State led the country in offensive yards per play a season ago (8.0) and figures to light up the scoreboard once again.

The roster is headlined by Heisman frontrunner C.J. Stroud (+250). The second-year starter looks to insert himself among the great Ohio State signal-callers in school history. Stroud will be surrounded by plenty of talent, with the Buckeyes' possessing the best skill position players in the conference. Sophomores Jaxon Smith-Njigba (WR) and TreVeyon Henderson (RB) make for the best QB-WR-RB trio in the conference – maybe even in the country.

The defense, which allowed 22.8 ppg (eighth in Big Ten), gets a massive boost with former Oklahoma State defensive coordinator Jim Knowles entering the fold. With eight starters returning, expect a more consistent output from the Buckeyes' defense in 2022.

Ohio State draws a formidable Big Ten West crossover slate, hosting Wisconsin on Sept. 24 (-16) and Iowa (-21.5) on Oct. 22. It will also travel to projected Big Ten bottomfeeder Northwestern on Nov. 5. One of Ohio State’s closest projected games is its Oct. 29 contest against Penn State (-12) at Beaver Stadium. Penn State has held its own against the Buckeyes, and despite Ohio State sporting a 5-1 head-to-head record over the past six seasons, the +5.33 average point differential shows that the Nittany Lions have been in every game.

Given the Buckeyes' positional depth, laying the chalk on Ohio State to breeze through the Big Ten might be the most worthwhile investment. Even with Ohio State north of a two-dollar favorite, you won’t ever see Ohio State’s money line around -210 pregame with them pegged as a double-digit favorite in every Big Ten contest. It’s no doubt a square selection, but the Buckeyes will be a tough out in 2022.

Michigan’s projected as the top contender to Ohio State, as Jim Harbaugh’s bunch is looking for their second-straight appearance in the Big Ten title game and College Football Playoff. The Wolverines were so close to an undefeated regular season but fell to in-state rival Michigan State, 37-33 in a game where they led by 16 in the second half and outgained the Spartans 552-395.

The Wolverines welcome new coordinators on both sides of the ball, as Sherrone Moore and Matt Weiss take over playcalling on offense and Jesse Minter runs the defense. Michigan was stable on offense and defense last season, ranking second in the conference in scoring offense (35.8 ppg) and fourth in scoring defense (17.4 ppg).

Just like last year, the Wolverines' path to Indianapolis will likely hinge on their Nov. 26 meeting with Ohio State in “The Game.” Ohio State’s currently a -13.5 point home favorite, so clearly, oddsmakers aren’t expecting a repeat of last season’s result.

Don’t count Michigan out, though, as their offensive line returns most of the players who helped it win the Joe Moore Award for most outstanding O-line in the nation last year. Its disciplined and tactical special teams make it a complete roster and a legit Big Ten title contender.

Thanks to its ability to be fundamentally sound in all three phases, Iowa consistently profiles as a Big Ten title sleeper in the parity-filled Big Ten West. After a 6-0 start last season that saw the Hawkeyes take down two preseason top-25 teams (Indiana, Iowa State), the Hawkeyes ranked No. 2 in the AP Poll.

Iowa would finish the regular season with a 4-2 record and go on to make its second-ever trip to the Big Ten championship game. Iowa wasn’t able to hold their own in Indianapolis, getting worn down by a much more physical Michigan team in a 42-3 blowout loss.

It’s possible Iowa returns to a second-straight Big Ten championship game, as the Hawkeyes get 14 starters back from last year’s Big Ten West-leading roster. Iowa isn’t the flashiest of teams (4.7 OYPP in 2021), as its run-first offense attempts to wear opponents down over the duration of 60 minutes. Head coach Kirk Ferentz is doing something right, though, as the Hawkeyes have won at least nine games in the past three full seasons (omitting 2020).

A tough Big Ten East crossover slate that pits the Hawkeyes against Ohio State on the road and Michigan at home is one of the reasons why the Hawkeyes sit at +2000 and have the second-best odds to win the Big Ten West behind Wisconsin. If Iowa’s able to steal a game or two as an underdog, it could very well reclaim the Big Ten West, giving it a shot to win the conference title.

If the Cornhuskers can limit their self-inflicting mistakes, they have a chance to represent the Big Ten West in the title game. That may be a really tall task, but 2022 is now-or-never for fifth-year head coach Scott Frost.

Despite a 3-9 finish in 2021, Nebraska performed like a much better team. Fox Sports’ Aaron Torres made note of Nebraska’s wild stats from a season ago that indicate a fair amount of bad luck and/or bad execution.

Veteran QB Adrian Martinez has since transferred to Kansas State, while ex-Texas QB Casey Thompson has joined the Big Red. Despite ongoing thumb issues, Thompson’s pegged to be Nebraska’s starter when it travels to Dublin to face Northwestern on Aug. 26.

Nebraska’s defense might take a step back with just five starters returning, but the offense is likely to improve in first-year offensive coordinator Mark Whipple’s pass-oriented scheme. The Cornhuskers return seven starters on offense from a team that ranked in the top half of the conference in scoring offense (27.9 ppg).

A big reason to buy into the Huskers in 2022 is their manageable schedule. There’s a path to a 6-0 start that would pit them against Purdue on Oct. 15 in West Lafayette for a chance to go 7-0. Nebraska’s back-half of the schedule is much tougher, with its most difficult game coming on Nov. 12 against Michigan at the Big House. Cornhusker fans have had to endure a lot of pain and suffering during the Scott Frost era, but maybe things will start to work out in 2022.

At +2800, Minnesota has an outside chance to make some legit noise in 2022. After a successful 2021 that saw the Gophers post a 9-4 record, Minnesota has the ability to win the Big Ten West for the first time in school history.

Fifth-year QB Tanner Morgan is back for one last season, and he’ll be reunited with offensive coordinator Kirk Ciarrocca, who was Morgan’s OC during his most productive season back in 2019. The Gophers also welcome back workhorse RB and Heisman long shot, Mohamed Ibrahim, who’s recovered from a left leg injury that cost him essentially all of 2021.

Minnesota’s defense was a reliable unit in 2021, sporting the Big Ten second-best scoring defense (17.3 ppg). It’s unlikely they maintain that type of production in 2022, but with a more efficient offense, they might not have to in order to win the Big Ten West.

A rough conference schedule that includes trips to Michigan State, Penn State, Nebraska, and Wisconsin puts a lot of pressure on Minnesota to consistently produce, which is why it’s a long shot.

You’ll notice a trend with all the sleepers and long shots coming from the Big Ten West. Ohio State’s going to be a tough out in the Big Ten East, but the Big Ten West is anyone’s game. After an impressive 48-45 win over a resurgent Tennessee program in last year’s Music City Bowl, Purdue attempts to notch its first appearance in the Big Ten Championship game.

The Boilermakers lose their top-two pass catchers from a season ago with David Bell (1,286 yards) and Milton Wright (732) no longer with the program. Starting QB Aidan O’Connell is back and remains one of the more underrated players in all of college football.

As long as O’Connell is taking snaps in Jeff Brohm’s offensive scheme, good things are likely to happen for the Gold and Black. Additionally, Purdue has a favorable schedule that could get them into the Big Ten championship game.

Yea, Aidan O’Connell balled out on Saturday.The @BoilerFootball QB threw for 536 yards and