Champ-Champ? Alexander Volkanovski says the 'work is not done' at featherweight following UFC 276, but we don’t believe him 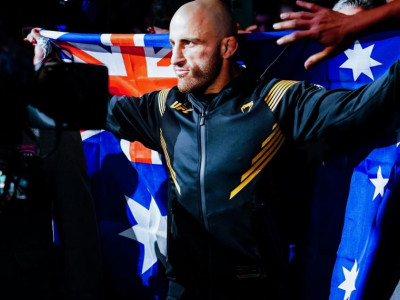 LAS VEGAS — You never want to get too far ahead of yourself in MMA because it is an extraordinarily volatile sport where the best-laid plans can be altered in an instant with a punch or kick. However, when you are Alexander Volkanovski and an opportunity to make history begins to present itself, you can’t ignore it. There have been four fighters in the UFC who have held world titles in two different weight classes simultaneously. All are destined to be Hall of Famers.

Could Volkanovski be the fifth?

But first, the UFC featherweight champion will have to close the chapter on Max Holloway once and for all at UFC 276, when two of arguably the greatest featherweights in the promotion’s history meet for the third time.

Volkanovski edged out Holloway twice when they met in 2019 and 2020, defended his title in his next two fights against Brian Ortega and Chan Sung Jung, and now aims to sweep the series against Holloway.

If he accomplishes that feat, then what? If you look at the rest of the featherweight division, there aren’t any clear contenders for Volkanovski. He’s teased the idea of going up to lightweight a few times, and a victory against Holloway will clear the path for him to venture up to 155 pounds and challenge for the currently vacant lightweight title.

But Volkanovski is playing coy with the media at the moment.

"The work is not done (at featherweight),” Volkanovski said on Wednesday at UFC 276 Media Day. “Maybe we have to sit back and wait a little bit…There are plenty of killers coming through in the division, but they aren’t there yet.”

Wait for who? The winner of Brian Ortega vs. Yair Rodriguez on July 16? Volkanovski's already defeated Ortega, and Holloway beat Rodriguez, so there would likely be a lack of interest in either opponent at the moment. Maybe Josh Emmett? He defeated Calvin Kattar by split decision recently and appears to be in line, but that doesn’t necessarily feel like a big fight. And all he keeps talking about are big fights.

Volkanovski has essentially beaten every single top featherweight in the UFC. Aside from Holloway, Ortega, and Jung, the Aussie also dominated the great Jose Aldo and finished Chad Mendes in two rounds. He’s made it a point to say that he wants to fight more frequently. And to do that, he’ll have to leave the featherweight division for a moment.

“If one division can’t keep me busy enough, give me two divisions,” he said.

Fighters don’t want to get ahead of themselves and disrespect their opponent. Especially when that opponent holds several UFC records and remains a significant threat. But Volkanovski has already defeated Holloway twice and is confident he’ll do it again in Las Vegas. And if you look at the current lightweight picture, the door is wide open for him to step in and challenge for another title.

Charles Oliveira was forced to vacate the lightweight title after he missed weight ahead of his May submission victory over Justin Gaethje. It’s assumed that Oliveira would be slotted in to reclaim his title for his next fight, but who would it be against?

Two guys who have essentially cleaned out their respective divisions facing each other for all the marbles? Who says no? Definitely not Volkanovski because he’s not interested in any fight that doesn’t involve the lightweight championship.

"It has to be for the belt (against Oliveira),” Volkanovski said. "I think I deserve that. What’s going to motivate me? Obviously the challenge, but that’s a massive fight. People talk money fights, but I want to go for that double champ status.”

If Volkanovski wants both money and legacy, this is the next move. But first, he has to get past the man who had the division in a stranglehold from 2017 to 2019. It's also worth mentioning that Max Holloway attempted to capture lightweight gold. He fell short against Dustin Poirier in 2019.

Defeating Holloway at UFC 276 would certainly end the conversation of who is the better featherweight. Accomplishing something that his rival did not would just be the cherry on top.

UFC 276 takes place on July 2. The FIGHT PASS prelims will start at 6 p.m. ET, while the prelims take place at 8 p.m. ET. The main card is set for 10 p.m. ET on pay-per-view. Adesanya and Cannonier should make their way to the octagon around 12:15 a.m. ET, depending on how long the undercard fights last.

The main card for UFC 276 is available in the U.S. and Mexico on the ESPN+ subscription streaming service for a pay-per-view cost.

Earlier fights are viewable live on ESPN+, ESPN, ABC, the WatchESPN app, and, for the early prelims, on UFC Fight Pass.

In the United Kingdom, the main card will be available on BT Sport 1, with the prelims available on UFC Fight Pass.

In Australia, the main card will be on Main Event, Kayo Sports, FOXTEL and UFC PPV on UFC Fight Pass.

In the U.S., the UFC 276 main card is available via pay-per-view on ESPN+, which also requires a subscription. The PPV price for UFC 276 is $74.99 for current subscribers. New subscribers can pay a bundle price of $99.98 for the UFC 276 pay-per-view and an ESPN+ annual subscription, which offers savings of more than 30 percent.

The Sporting News may earn an affiliate commission when you sign up for a streaming service through our links. The Sporting News' affiliates have no influence over the editorial content included in this article.