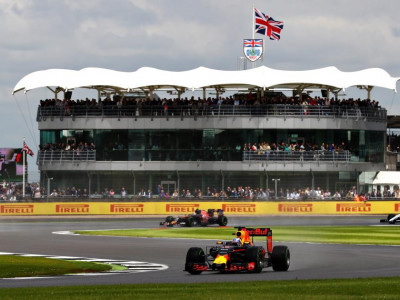 When Lewis Hamilton recorded the first of his eight British Grand Prix victories to date, part of the reason why his performance was so celebrated was because of the conditions.

Hamilton showed superb skill on a track that carried pools of water at the start, and a decision to switch his McLaren tyres to intermediate-wet proved pivotal in the race.

The winner changed his tyres again before the end, sticking with the same compound, and ended up crossing the line first by a colossal 68 seconds.

What are the chances of drama in a downpour this time? Will rain affect Silverstone? Here's what we know.

There is a fair chance of rain throughout the day during the first practice sessions on the famous circuit.

The chance of rain rises to 85 percent on Saturday, although the worst of it will hopefully have passed before qualifying begins at 3 p.m. BST (10 a.m. ET).

Temperatures are expected to drop by one or two degrees Celsius compared with Friday.

Any rain on race day is expected to fall in the morning, meaning the circuit could be dry by the time the lights go green at 3 p.m. BST (10 a.m. ET).

Temperatures could reach a near-peak of 18 degrees Celsius (64 degrees Fahrenheit) during the race.

It is possible that organisers could red-flag the race before any laps are completed if there is heavy rain, as happened at the Monaco Grand Prix in May, when drivers were merely sent out for a formation lap to get used to the conditions.

At the 2021 Monaco Grand Prix, the start was delayed for hours amid similar conditions and safety concerns.

A heavily reduced race eventually took place in order to reach a conclusion, only reaching 64 laps within the allotted two hours. The top 10 runners received half points.

Last year's race in Spa was delayed for hours after heavy rain meant it was unsafe for the race to start. Eventually, race directors decided to run a handful of laps to achieve an official result and half points were awarded to the top 10 runners.

Formula One changed the rules before the 2022 season, ordering that there could not be a result in a race unless two racing laps were completed under green flag conditions. Races are also now allowed to take up to three hours if there is rain.

In races where two laps are completed but 25 percent distance is not reached, only the top five finishers are awarded points.

Technical teams can have difficult decisions to make when the weather does not go to plan. The vagaries of English summer weather can be unhelpful, although the scenes in Monaco and Belgium were typical of the judgement calls required each season.

Slick tyres can risk aquaplaning in wet weather, with intermediate tyres more effective on a damp track and wet tyres required on a waterlogged surface.

When the conditions are shifting, intermediate tyres are usually the right call. When the time is right to switch from slick to wet or vice versa, poor decisions can cost drivers precious time.

After a record crowd of around 350,000 people returned to Silverstone for the 2021 British Grand Prix, a similar figure is expected this year.

British hero Lewis Hamilton has dominated the race in recent years, and championship top two Max Verstappen and Sergio Perez are well ahead of him before the start of the action.

There is an abundance of entertainment planned around the site before and during the weekend, and organisers will hope any bad weather proves a bit of a damp squib rather than chaos-causing.

In 2012, heavy rain on Friday and Saturday led to waterlogged campsites for the many fans who decided to pitch up in Northamptonshire for the weekend, as well as near-flooded car parks.

Bosses eventually had to take the drastic step of encouraging ticket-holders not to attend, fearing more downpours on race day.

There was relief when that scenario did not materialise. It was too late, however, to save the Grand Prix from financial misery: refunds thought to total hundreds of thousands of pounds were paid to fans who had answered their calls to stay away.