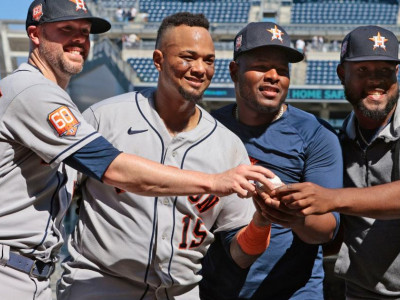 The 3-0 victory marked Houston's first no-hitter since Justin Verlander threw one against the Blue Jays on Sept. 1, 2019. It was the Yankees' first time being no-hit since 2003. That also was a combined effort by the Astros, with Houston using a record six pitchers.

Saturday's no-hitter was also historic because it happened at the new Yankee Stadium. The ballpark had yet to host one since it was opened in 2009.

Lastly, the no-hitter was impressive because the Yankees sport one of MLB's best offenses. New York leads the league in runs, home runs and OPS and had six more wins (52) than any other MLB team entering play Saturday.

How did Javier and the Houston bullpen shut down that high-powered Yankees offense? Here's a rundown of MLB's third no-hitter of 2022.

Javier set career highs in both strikeouts and pitches thrown (115). He faced 23 batters, just two over the minimum, during his seven innings. He walked Josh Donaldson in the first inning, and Donaldson reached on a throwing error by third baseman Alex Bregman in the seventh.

Houston needed Javier to keep them in the game as he went toe-to-toe with Yankees ace — and former Astro — Gerrit Cole. Cole didn't allow a run until the top of the seventh when J.J. Matijevic hit a solo home run.

Javier became the first pitcher to throw seven hitless innings vs. the Yankees since Hoyt Wilhelm pitched a complete-game no-hitter against them for the Orioles in 1958.

Neris' inning was the rockiest of the game for the Astros. He walked two of the first three batters he faced.

But Neris wasn't erratic. He got squeezed by home plate umpire Alex Tosi on his walk to DJ LeMahieu.

Neris got out of the inning by retiring Joey Gallo on a deep fly to right and Aaron Judge on a fielder's choice grounder.

He said after the game that he was motivated to preserve the no-hitter for Javier.

Pressly was nearly flawless in his inning of work. He needed just 15 pitches to retire the Yankees' Nos. 2, 3 and 4 batters in order to finish off the no-hitter.

Pressly struck out Anthony Rizzo and Josh Donaldson to open the inning, and then he induced Giancarlo Stanton to ground out to Alex Bregman to end the game.

The final out from our 14th no-hitter in team history. pic.twitter.com/WKeU4f0Ikc— Houston Astros (@astros)

In a postgame interview, Pressly expressed his elation at being involved in the no-hitter.

“To do it in New York, it’s the best feeling in the world,” Pressly said.