How good is Scotty Pippen Jr.? 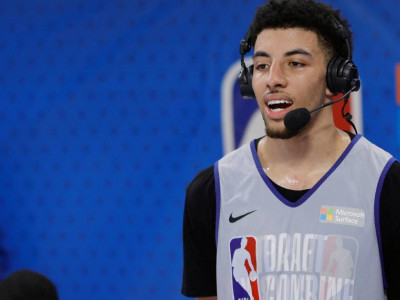 Vanderbilt junior guard Scotty Pippen Jr., son of Hall of Famer and six-time NBA champion Scottie Pippen, is one of several second-generation prospects hoping to hear their name called during the 2022 NBA Draft.

First things first, the spelling of Scotty isn't a typo, as his father is actually Scotty Pippen Sr., but he chose to go by "Scottie."

Pippen, 21, enjoyed a fruitful three-year career at Vanderbilt under the tutelage of head coach Jerry Stackhouse and now looks to take his game to the next level after forgoing the remainder of his college eligibility.

His name will definitely catch your eye, but Scotty Pippen Jr. is much more than the son of Scottie Pippen, evidenced by the level of intrigue leading into the draft.

Just how good is Scotty Pippen Jr.? Get to know more about the Vanderbilt product below.

As a senior, Pippen was graded as a four-star recruit by ESPN, choosing Vanderbilt over scholarship offers from San Francisco, UC Davis, UC Santa Barbara and Washington State.

As a freshman during the 2019-20 season, Pippen hit the ground running, earning SEC All-Freshman honors with 12.0 points and 3.6 assists over 32 games, but the Commodores went 11-21 on the season.

While the COVID-19 pandemic greatly impacted the 2020-21 season, Pippen stepped up his game, boosting his averages to 20.8 points and 4.9 assists over 22 games, good for First Team All-SEC honors, but Vanderbilt again struggled with a 9-16 record.

This past season, Pippen again earned All-SEC First Team selection, leading Vandy to a 19-17 record with averages of 20.4 points, 4.5 assists, 3.6 rebounds and 1.9 steals per game. His scoring led the SEC and ranked 14th in all of NCAA Division I.

The paths of the two could not be much different.

Scottie Pippen began his college career as a 6-foot-1 walk-on at NAIA Central Arkansas, while Scotty Pippen Jr. earned a scholarship to Vanderbilt, a high-major Division I program.

The elder Pippen sprouted to 6-foot-8 while in college, allowing him to blossom into one of the nation's best players with averages of 23.6 points, 10.0 rebounds, 4.3 assists and 3.1 steals per game as a senior, resulting in his being selected fifth overall in the 1987 NBA Draft.

Scotty Pippen Jr. entered — and leaves — college standing at 6-foot-1, impacting his rebounding numbers, but his assists and steals figures suggest he and his father share a few instincts.

Pippen was one of the players invited to the NBA Draft Combine in Chicago. Here is how he measured out:

At the combine, Pippen impressed in the scrimmages, displaying his ability to score at multiple levels and make high-effort plays on the defensive end.

Pippen is not listed on SN's mock draft or top-60 big board and is likely to be a late-second round pick or go undrafted, though he could be a steal as an undrafted free agent.