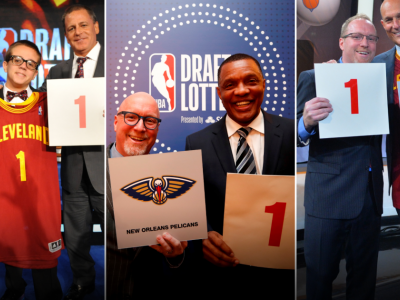 We all can appreciate a long shot, right?

Each year, the NBA Draft Lottery sees the futures of 14 teams hinge upon a series of ping pong balls and the ultimate game of odds.

Since 2019, the three teams with the worst record in the previous season each have a 14.0 percent chance of winning the top pick in the draft. From there, odds are staggered to where every team still has an opportunity.

The team with the best record among the 14 lottery teams has a 0.5 percent chance of winning the No. 1 pick.

So, yes, I'm telling you there's a chance.

While lottery results are largely based on odds, luck is certainly a factor as well. Look back at the most recent teams to defy odds to win the top pick in the NBA Draft.

Since the weighted lottery system was adopted in 1990, eight teams that had a first-pick probability of 6.30 percent or lower have won the No. 1 overall pick in the NBA Draft, with the most recent team being the Pelicans in 2019.

In 1993, the Magic won the lottery with a 1.5 percent probability, marking the largest lottery upset in the weighted era.

Here are the odds for the 2022 NBA Draft lottery.

The Pelicans acquired the Lakers' pick in the 2019 trade that sent Anthony Davis to Los Angeles.

The Thunder acquired the Clippers' pick in the 2019 trade that sent Paul George to Los Angeles.