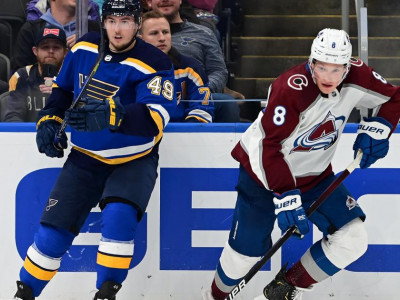 Only three NHL teams managed to win their first-round series in fewer than seven games. Two of them were the Avalanche and the Blues. Now, the Central Division rivals will square off for a right to go to the Western Conference Finals.

Colorado managed to dispatch Nashville with ease in the first round. The Avalanche were the lone team to earn a sweep, beating the Predators in four consecutive games thanks to strong efforts from Nathan MacKinnon (five goals) and Cale Makar (10 points).

Meanwhile, the Blues beat the higher-seeded Wild in a six-game series. David Perron has starred for the Blues, leading the team in goals (five), assists (four) and points (nine) after the first-round series.

It will take a lot for the Blues to cool off the red-hot Avalanche, but the season series between the two was close. Colorado won it 2-1 but scored just one more goal than the Blues (12-11).

Here's how you can watch the Avalanche and Blues square off in Game 1 of their Western Conference Semifinals series.

Game 1 of the Avalanche vs. Blues series will air on TNT in the United States. Viewers in Canada can catch the game on SportsNet and CBC.

Viewers in the U.S. can stream every NHL playoff game live on Sling TV. With the Sling Orange Sports Extra package, they can get $10 off their first month now with access to ESPN, ESPN2, ESPN3 and TNT. NHL playoff games on ABC are simulcast on ESPN3, which is included with Sling Orange, available for $35 per month ($25 the first month for new subscribers).

Game 1 of the Avalanche vs. Blues series is scheduled to start at 9:30 p.m. ET on Tuesday, May 17. The game will be played at Ball Arena in Denver, Colo., the home of the Avalanche.

The Avalanche are heavily favored to win the first game of their series against the Blues. Colorado has yet to lose during the 2022 Stanley Cup Playoffs after sweeping the Predators in their first-round series. The Blues, meanwhile, beat the Wild in a six-game series.

Colorado and St. Louis met three times during the regular season. The Avalanche won the season series 2-1 but outscored the Blues by just one goal (12-11).