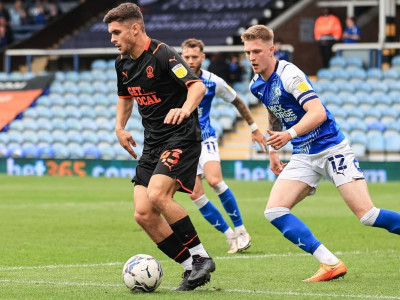 On Monday, Blackpool's Jake Daniels became the UK's first male professional footballer to come out publicly as gay since Justin Fashanu in 1990.

Daniels, 17, shared his story with Sky Sports and Gary Neville believed his decision will go down in history as an important day for English football...

"I was incredibly proud just to see a 17-year-old be able to actually do an interview of that level of quality," Neville told Sky Sports.

"I would not have been able to do that in my mid-twenties or late-twenties. What he has just done took incredible courage. We have been in dressing rooms for many, many years and that would seem like the unthinkable to announce that you are gay. I can't imagine how difficult that has been.

"It is a day of great importance for Jake and his family but also for English football. It will go down in history. It is a big, big moment for football players. It is of massive importance, this.

"I know the manager there, Neil Critchley," Carragher told Sky Sports. "I think it is really important, the role of the football club, if there are other players in the future, how Blackpool have gone about it.

"Certainly, Neil Critchley in that role will be a huge support mechanism for Jake and that is what he will need going forward. It looks like he has huge talent as a player and we hope he will do really well.

"I can only reiterate what Gary has said about the courage of Jake. But it is not just about Jake, it is about the football club, and I think they are an example to others of how to go about this when other players come out in the future."

A Premier League statement, read: "We support Jake and believe football is for everyone. Clubs and communities are stronger when everyone feels welcome, on and off the pitch. It's up to all of us to make that happen, which is why we should all speak out against discrimination and in support of the LGBTQ+ community."

A statement from the FA, read: "Jake, you are an inspiration to us all and we fully support your decision to be open about this part of yourself. Football is a game for all, with diversity at its heart, and this is a hugely positive step as we strive to build an inclusive game that we can all be proud of."