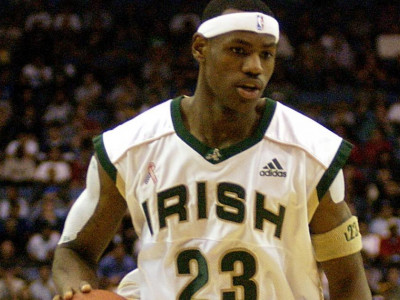 Every current high school basketball player grew up dreaming of being the next LeBron James. Marquis "Mookie" Cook is getting a chance to do that.

Well, at least on the big screen. Cook is going to be playing James in an upcoming movie produced by the Lakers forward.

LeBron and Maverick Carter are teaming up with NBCUniversal to create a biopic of James' life growing up in Akron, Ohio. The movie — titled "Shooting Stars" — is based on a biography of James written in 2009. And evidently, James and Co. thought that Cook would be the perfect choice to play the lead.

Cook is a basketball player by trade, but now, he will take up acting on the side. Here's everything you need to know about Cook as he prepares to transform himself into LeBron on the court and off it.

Mookie Cook is a five-star recruit who 247Sports has rated as the No. 5 overall player in the Class of 2023.

Cook received offers from 22 schools including Gonzaga, Kentucky, Arizona, Auburn, Texas Tech, UCLA, USC and more before committing to play at Oregon. The Oregon native is the second-highest-rated recruit in Oregon history behind only Magic center Bol Bol.

While Cook is from Oregon, he played his high school ball at Compass Prep in Chandler, Ariz. He averaged 11.5 points per game last season and led Compass Prep to its second consecutive GEICO Nationals appearance, per MaxPreps. He is the second-highest-rated recruit that

LeBron's movie "Shooting Stars" is a biopic based on a book of the same title about James written Buzz Bissinger in 2009. According to Cleveland.com, the movie "focuses on the NBA superstar’s childhood years, telling the story of a close-knit group of friends who overcome the challenges of growing up in the inner city and find refuge together on and off the court."

James is helping produce the movie along with his long-time friend and business partner, Maverick Carter. It is being made for NBC's streaming platform Peacock as the first part of a four-picture deal between the network and James and Carter's SpringHill Company.

Cook is expected to star in the movie alongside Caleb McLaughlin, who is best known for portraying Lucas in Netflix's "Stranger Things," and Algee Smith, who plays Chris McKay on HBO's "Euphoria."