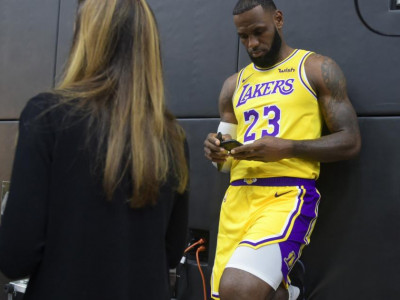 With no playoff games on the schedule for Monday, Los Angeles Lakers superstar LeBron James decided to entertain the masses of NBA-hungry fans by holding an impromptu "Ask Me Anything" session on Twitter. And fortunately, James didn't hold back.

James was an open book during his AMA, answering a wide range of questions like what's his favorite ice cream flavor (cookies & cream or cookie dough), his favorite movie (Gladiator or Godfather) and his favorite vacation spot (Capri, Italy).

The 37-year-old swingman also answered a question that has caused vicious and spirited debates — cake or pie? James chooe cake, which we all know is the lesser of the two. But hey, different strokes for different folks.

James however, didn't just answer mundane questions. He also touched on his favorite player in the NBA, as well as the potential of playing with his son LeBron "Bronny" Jr.

He even answered a question from Tampa Bay Buccaneers quarterback Tom Brady.

So you don't have to go endlessly scrolling through James' Twitter feed, here's a breakdown of the best answers from his AMA:

Seeing what James was up to on Twitter, NFL legend Tom Brady decided to get in on the fun and posed an interesting question to the Lakers star.

Brady wanted to know who would win in a 5-round ice hockey shootout. Always confident, James picked himself but did offer the caveat it would be a narrow victory.

me but barely. May be swinging from my knees though. 🤣🤣🤣🤣🤣🤣🤣— LeBron James (@KingJames)

It's hard to imagine James on ice skates, but apparently Brady and seemingly the entire NHL wants to see it happen:

James answered two questions about his son, LeBron "Bronny" James Jr., who the Lakers superstar has openly talked about playing with in the NBA. Bronny will be a senior in high school next school year and seems destined to play in the league.

That's at least the hope for James as he reiterated during his AMA.

James was also asked if his son has beat him in one-on-one yet. The future Hall of Famer kind of deflected the question but did state that the last time the two faced off against each other, things ended rather dramatically.

The last time we actually played I shattered the backboard on a dunk so we couldn't finish the game. 🤷🏾‍♂️🤣— LeBron James (@KingJames)

James was asked about who his favorite young player in the NBA is right now. He was quick to answer, typing out in all capital letters that Dallas Mavericks superstar Luka Doncic is his favorite player overall.

This aligns with the type of praise James has showered Doncic with in the past.

"I love everything about his game," James said in February 2022.

I love everything about him. The way he plays the game reminds me of the way I play the game.

Lakers’ LeBron James on Mavericks’ Luka Doncic: “The way he plays the game reminds me of the way I play the game. We’re triple threats. We rebound, we pass, which is the number one thing on our mind. … and we’ll put 40 on you too if you disrespect us.” pic.twitter.com/9vrxm4Zrvq— Ben Golliver (@BenGolliver)

As a hypothetical, James was asked who would he choose to play with in a game of 2-on-2 vs. Michael Jordan and Scottie Pippen. For James, the answer was somewhat tough as he couldn't give just one name. He did however, choose three superstar players in their own right — Kobe Bryant, Kevin Durant or Kyrie Irving.

James was never teammates with Bryant and Durant in the NBA but he did play with both on Team USA.

At 37 years old, James is no spring chicken and is on the tail end of his illustrious career. But according to James, retirement isn't even on his mind.

The way I feel, I can go on for a min to be honest. It's really up to me and my mental staying fresh/sharp! I'm still psycho driven!— LeBron James (@KingJames)

Next season will be James' 20th in the NBA. And based on how close he came to leading the league in scoring during this past regular season, it doesn't seem like James will be retiring anytime soon. Or as he so aptly put it, James remains "psycho driven!"