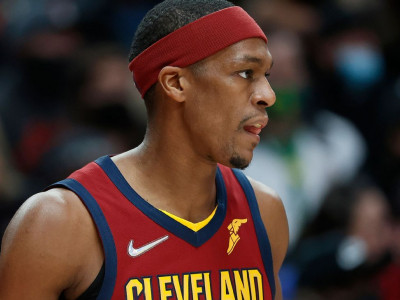 The NBA on Monday said it's in the process of gathering more information after veteran point guard Rajon Rondo allegedly threatened a woman with a gun at her house last week.

The woman filed for an emergency protective order against Rondo on Friday in Louisville, Kentucky, a copy of which was obtained by ESPN. The order was granted later that day.

Her allegations were made in the request for the EPO.

In it, she alleged that Rondo and a child were playing video games on Wednesday when she asked the child to separate laundry. Rondo reacted angrily, according to the woman, ripping the game console out of the wall and smashing several items in the house, leaving the boy and another child there upset.

The woman alleges that Rondo said to her "you're dead" before leaving the house, only to return shortly thereafter, this time with a gun and demanding to see one of the children. The woman said she grew scared of the situation, so brought him downstairs, and Rondo pulled him outside, allegedly while still holding the gun, while he yelled at him. He then demanded to see the other child, too, and she also came outside, as Rondo yelled at both of them for being afraid of him, the woman alleged.

According to EPO obtained by ESPN, the woman called former interim Louisville Metro Police chief Yvette Gentry, who eventually arrived at the house. However, the woman said Rondo wouldn't allow Gentry inside. The woman said she locked herself in the house with the kids, and Gentry eventually told her Rondo had left and she had his gun.

The woman filed for the protective order on Friday, saying in it that she feared for the safety of the children and that Rondo has a history of "volatile, erratic (and) explosive behavior."

The order then was granted later Friday, with a judge saying Rondo must stay at least 500 feet away from the woman and the children, and must temporarily surrender any firearms to the Jefferson County Sheriff.

NBA spokesman Mike Bass told ESPN's Malika Andrews that the league is aware of what allegedly happened and is "in the process of gathering more information." Messages left by ESPN to Rondo's representatives weren't immediately returned.

TMZ Sports, which first detailed the allegations on Monday, reported that Rondo has not been named as a suspect in any criminal report connected to what allegedly happened "at this time."

Rondo, who is from Louisville and played collegiately at Kentucky, just wrapped up his 16th NBA season. The four-time All-Star and two-time NBA champion played 18 games for the Los Angeles Lakers before a January trade to the Cleveland Cavaliers. In 21 games for the Cavs, he averaged 6.2 points and 4.9 assists.

Information from ESPN's Baxter Holmes and Ramona Shelburne was used in this report.