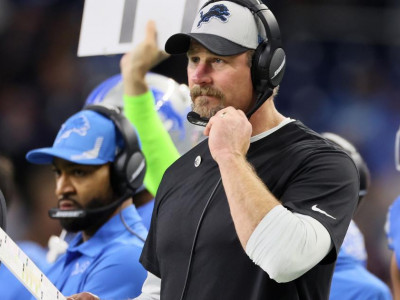 The NFL released its 2022 schedule Thursday, and the Lions drew an ignominious mark during the reveal. Detroit is the only team across the league that will not play a single prime-time game in 2022.

Every one of the Lions' 17 games this season will be played in the early-afternoon window. All but one of their contests will be played at 1 p.m. ET; the lone exception is the Thanksgiving Day battle between them and the Bills, which will begin at 12:30 p.m. ET.

Some coaches across the NFL may look at this as a slight. However, Lions coach Dan Campbell didn't think of it that way at all. In fact, he believes it might be an advantage for the team.

"It’s awesome," Campbell said during the team's rookie minicamp on Saturday, per the Detroit Free Press.

You knock them out, you go home, you get ready for the next opponent. You’re not waiting all day in the hotel, all night, and then you go up and now you’re on a short week it feels like.

Campbell's point has merit. The Lions will have one of the most consistent schedules in the NFL thanks to their lack of prime-time games. They will have just one short week, and that's ahead of the Thanksgiving Day game that they have held every year since 1945.

And even that short-week contest will be held early in the day. So, Lions players will be able to stay in a game-day rhythm all season. They won't have to adjust it on a week-by-week basis to accommodate different start times. That could benefit them as they look to improve upon their 3-13-1 record from 2021.

MORE: The best of Dan Campbell's quotes as coach of the Lions

The Lions' schedule quirk is among the most notable across the NFL. One of the others is that the Steelers will never leave the Eastern time zone during the 2022 regular season. It will be interesting to see whether either of these teams can benefit from this unorthodox consistency.