Patrick Beverley’s hated for Chris Paul has no end 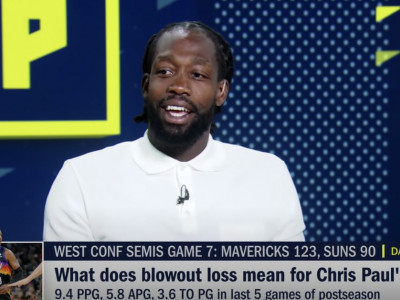 Patrick Beverley has been one of the NBA’s better defensive guards for the last decade, but he might already have his second career locked down after retirement. Beverley went on ESPN Monday morning to talk about the NBA Playoffs and ethered Chris Paul and the Phoenix Suns almost as badly as the Dallas Mavericks did in their blowout Game 7 win.

The Mavs smoked Phoenix by 33 points in Game 7 to advance to the conference finals. It was a shocking end to the season for the Suns after they won a league-high 64 games during the regular season following an NBA Finals appearance last season. One person who was not surprised is Beverley. The Minnesota Timberwolves guard went on TV and picked Dallas to win before the game. His victory lap on ESPN the following day was one of the more brutal public assessments you will ever here from an athlete when talking about a peer who is much more accomplished than he is.

Beverley said CP3 can’t guard anyone. He said the Suns should have benched him instead of Deandre Ayton as Dallas continued to target the 37-year-old guard. He said no one in the league is scared of Paul or the Suns. The entire interview was a little ridiculous but undeniably entertaining. Watch it here:

Pat Bev continued the slander when debating the playoffs with Stephen A. Smith.

“Ain’t nobody afraid of anybody over there in Phoenix, man. Everybody in the league knows that.”.@patbev21, tell us how you really feel about the Suns pic.twitter.com/GlxSAXUrq5— First Take (@FirstTake)

Paul and Beverley were once traded for each other when the Rockets acquired CP3 from the Clippers and sent back Beverley in the package. It’s no secret the two players do not like each other.

Patrick Beverley was ejected after shoving Chris Paul from behind. pic.twitter.com/z0GFL1tb6J— SportsCenter (@SportsCenter)

Beverley is right that the Mavs relentlessly attacked Paul, and it eventually wore him down. The Mavs applied full court pressure to CP3 throughout the end of the series when Phoenix had the ball, and hit him with screen after screen when Phoenix was defending. Paul has been a very good defensive player throughout his career, but he’s 37 years old now and one of the smallest players in the league.

Paul has a long history of playoff flameouts when his team is leading the series. It happened again this year.

To most players, a 2-0 series lead is great. For Chris Paul, it spells disaster pic.twitter.com/nAnCGq61Oy— SB Nation (@SBNation)

Of course, Paul is also 20 times the player Beverley has ever been. While Beverley’s comments are great for a soundbite, it’s hard to think they have much substance given that CP3 has had a significantly better career. Beverley grinded his way into a 10+ year career as a second round pick and deserves credit for that, but he’s not a legend and future Hall of Famer like Paul.

One player Pat Bev does respect? Luka Doncic, who dominated Beverley in the playoffs last year:

Beverley mostly comes across like any old hater you can find on Twitter. It’s hard to think of an NBA player who has talked more shit with less accomplishments than Pat Bev. At least he isn’t boring, though.

CP3 may not have many years left, but it’s safe to assume he’ll have something planned for Beverley next time they meet.