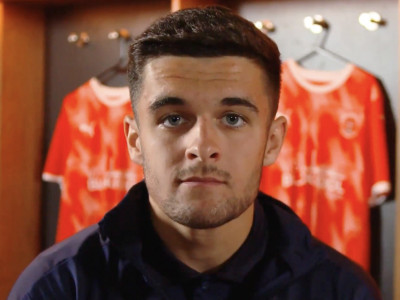 Jake Daniels, a soccer player for Blackpool FC, has come out publicly as gay, marking a milestone for English soccer.

In an interview with Sky Sports, Daniels said he has experienced massive amounts of support from his family, teammates and everyone at Blackpool.

“Blackpool have been absolutely amazing too,” Daniels said. “I am with them every day and I felt safe. My team-mates have all been so supportive about it and everyone has had my back. They’ve been asking tons of questions, they have all been intrigued and their reaction has been brilliant. It’s the best thing I could have asked for.”

This makes Daniels the only publicly out professional men’s soccer player in England. Blackpool plays in the Championship, which is the second tier of English soccer, below the Premier League.

Justin Fashanu was the last publicly out gay soccer player in England to play at that level, three decades ago.

At only 17 and already playing in the Championship, Daniels has a very bright future ahead of him. He only signed his first professional contract — with Blackpool — earlier this year.

Daniels just a few days ago posted on Instagram that “I don’t think I could be any happier with how things have gone this season,” with 30 goals and signing a deal with adidas.

Coming out, and the support he will experience, will simply add to that.

Be sure to watch the full interview on Sky Sports.