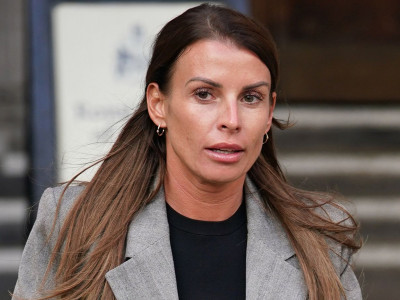 Coleen Rooney has admitted trolling directed at Rebekah Vardy after her 'Wagatha Christie' post was "disgusting".

In a viral social media post in October 2019, Mrs Rooney said she had carried out a "sting operation" and accused Mrs Vardy of leaking "false stories" about her private life to the press - prompting her to be dubbed "Wagatha Christie".

Mrs Vardy, who is married to Leicester City striker Jamie Vardy, denies leaking stories to the media and is suing her fellow footballer's wife for libel.

Mrs Rooney is defending the claim on the basis her post was "substantially true".

Shortly after the bombshell reveal was posted, Mrs Rooney says she was contacted by Mrs Vardy who demanded "WTF (what the f***) - what is this?"

To which Mrs Rooney replied: "You know what it is."

Mrs Rooney told Mrs Vardy's barrister Hugh Tomlinson QC at the latest day of hearings at the High Court on Monday that she had "zero interest in what is going on in her life".

The barrister said: "She makes it clear to you that it wasn't her, doesn't she?"

"She says she has zero interest in what's going on in my life, which I believe is totally untrue," Mrs Rooney replied. "She talks about me a lot... so that was a lie," she added.

But, when asked about the abuse Mrs Vardy received on social media after the reveal post, Mrs Rooney had some sympathy.

She told the court: "It is disgusting. I would never ever wish that upon anyone.

"I was getting trolled as well but obviously Mrs Vardy's was disgusting, the things they were saying... the world we live in today and the trolling is terrible."

Mrs Rooney then discussed WhatsApp messages the court had heard between Mrs Vardy and her agent Caroline Watt - where Mrs Rooney was discussed.

She said she had never met or spoken to Ms Watt, commenting on the agent's exchanges with Mrs Vardy: "The messages that went on between them were just evil and uncalled for."

"There's no need for it, I've never done anything to them," Mrs Rooney added.

Coleen Rooney admitted she was inundated with pictures, screenshots and memes after her 'Wagatha' post and said "obviously people didn't realise how serious what was behind it was"

In private correspondence with a member of her PR team, the court heard Mrs Rooney had described Mrs Vardy as "fame hungry"

Wayne Rooney, Coleen's husband, did not know about the "sting", the court hears. Asked why, Mrs Rooney said: "One thing I don't do is put my troubles and my worries on anybody else"

Earlier on Monday, Mrs Rooney said she wanted a "totally untrue" story about a so-called gender selection procedure to be published as "evidence" for her sting operation to discover the source of leaked stories.

One of the Instagram stories used in the "sting" was posted on 8 April 2019, with Mrs Rooney claiming she was travelling to Mexico to look into a procedure to determine a baby's sex.

"Let's go and see what this gender selection is all about," Mrs Rooney posted, accompanied with a number of heart emojis and what appeared to be a grimacing face emoji.

Around four months later, The Sun published a story online on 15 August 2019 with the headline "Col's baby girl bid", marked as an exclusive, detailing Mrs Rooney's alleged "desperate bid to have a baby girl".

Asked about this post by Mr Tomlinson, Mrs Rooney said: "I wanted the story to run so I had evidence."