Mikel Arteta's Arsenal have 'no chance' of Champions League now and I fear for them, says Jamie Carragher 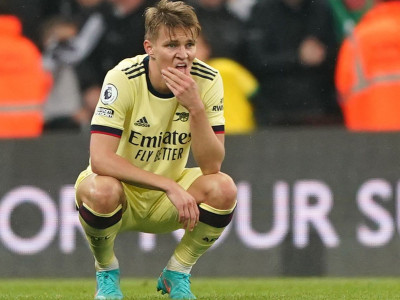 Arsenal's 2-0 defeat to Newcastle was a huge blow to their top-four hopes with Jamie Carragher now fearing for Mikel Arteta.

Ben White's own goal and Bruno Guimaraes' late strike mean that Arsenal remain two points behind Tottenham going into the final game of the season, with Spurs needing only a draw to finish fourth given their far superior goal difference.

Asked if their hopes of Champions League qualification were over, Carragher said: "Yes. Spurs are not losing from that position. Arsenal know it. There is nobody in world football who thinks Arsenal will make Champions League football off the back of that. No chance."

Carragher was highly critical of the performance at St James' Park as Newcastle dominated possession from the outset with Arsenal struggling to muster much at the other end.

"I thought they were awful. And I have been a big supporter of Mikel Arteta and this Arsenal team because since I have started at Sky I have got sick of saying the same things about Arsenal. I was sick of it myself. I actually enjoyed seeing young players I could get behind.

"I think the fans could get behind it. They almost accepted they would not be challenging for honours but there was something building. But that performance today was bad. That was a cup final today, we know how important Champions League is.

"To be that poor in the first half and then produce that in the second half, it is not acceptable. It was not the result, it was the manner of the result, they were awful from minute one."

The defeat consigns Arsenal to the Europa League and Carragher believes that will have far-reaching ramification for the Gunners - and their coach.

"I think that is a problem not just this season but I think it is a huge problem for Mikel Arteta and this Arsenal team going forward," added Carragher.

"Europa League next season, Thursday, Sunday. I think they have had their opportunity this season - a big one - having no European football. That was a big advantage for them.

"They are not in the four best sides in the country but they had an advantage on the other teams and they still haven't made it pay. I fear for Arsenal and Mikel Arteta next season.

"I think it is going to be tough for him. I think this will be a game that will be looked back on when he eventually leaves the club. This is Arteta's first job so he doesn't really have that belief behind him.

"If Antonio Conte has a bad time, you know he won the league at Chelsea, at Inter Milan. You have got that feeling that he has done it before and he knows what he is doing.

"Arteta has never done it before. That is not a criticism, it is just a fact. He needed that tonight. I really fear for him next season and if Arsenal are seventh or eighth at Christmas time with them in the Europa League there is going to massive pressure on his job."

Gary Neville agreed with much of what Carragher said.

"I gave them the benefit of the doubt at half-time," Neville told Monday Night Football.

"That is a young team that doesn't have the experience or the character. I never fully trusted them to get into the top four, to be honest with you, all the way through. But I thought they would come out in the second half and respond. It tells us where they are at."

Speaking about the Premier League title race, Carragher has seen signs from Aston Villa - managed by his former Reds captain Steven Gerrard - that they can cause problems for Manchester City on the final day. Much as West Ham did in the 2-2 draw on Sunday.

"Aston Villa have the type of players who can make the kind of runs that Michail Antonio and Jarrod Bowen made," Carragher told Monday Night Football. "If you think of Danny Ings and Ollie Watkins, the problems they caused running in behind against Liverpool."

However, Liverpool need to get a result against Southampton on Tuesday to take the title race to the final day and with key players struggling for fitness after the FA Cup final win over Chelsea, Carragher expects Jurgen Klopp to have one eye on Real Madrid.

"I think if Liverpool play their best team in the Champions League final, it is an 80 per cent chance of winning that game, I really do believe that.

"So it certainly won't be a full-strength Liverpool team."

At the other end of the Premier League table, one of Everton, Leeds and Burnley will be joining Watford and Norwich in the Championship next season. Carragher believes that Leeds are the most likely to face the drop - backing Everton to stay up.

"I think Everton will be OK, I do believe that. Listen, there will be a real panic if they do not get a good result against Crystal Palace but Everton need to remember where they were two weeks ago before that Chelsea game when they were five points behind.

"So they are still in a really good position."

He is less confident that Leeds can pick up the win they may well need at Brentford to keep themselves out of the relegation zone.

"I fear for Leeds. I think Burnley can get something out of the next two games, whether that is Aston Villa or the last game against Newcastle.

"I just think Leeds will go down."