What is St Totteringham’s Day? Arsenal vs. Spurs battle explained 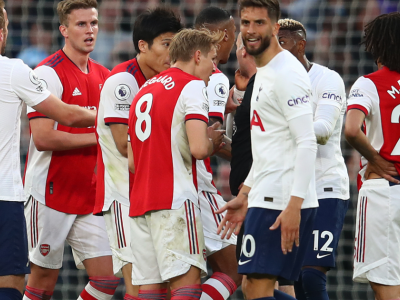 Arsenal fans are licking their lips, as Mikel Arteta's side eye the possibility of a top four finish for the first time since 2016, and the return of Champions League football to Emirates Stadium. The battle for fourth place looks likely to see one of Arsenal and Tottenham lose out, and Gunners fans will be licking their lips at the prospect of finishing above Antonio Conte's outfit.

There's only two points between the sides as things stand, but Arsenal's fate is in their own hands as they have a game in hand while Spurs have just one match left to play. Having finished behind Tottenham for half a decade, Arteta's outfit will be eager to finish above their local rivals, and pip them to a seat at the top table of European football.

MORE: Will Arsenal finish top four? Schedule, how long Gunners have been out of Champions League and more

Finishing above Tottenham has been a formality for much of Arsenal's recent history, even reaching the point that Arsenal supporters have invented a holiday to mark the occasion. The Gunners celebrate St. Totteringham's Day, historically in April or May. It marks the day in the league season when it becomes mathematically impossible for Tottenham to finish above Arsenal.

This season, St. Totteringham's Day, if it occurs, will mean that Arsenal have finished in the top four, and that they've finished above Tottenham for the first time since the 2015-16 season. That season, Arsenal finished a point above their rivals, and Tottenham have reversed that in recent years, twice finishing one point ahead of Arsenal. Finishing back in the top four, and ahead of their rivals, will bring a mixture of jubilation and relief to fans of Arteta's side.

In the 29 seasons of the Premier League, Tottenham have finished above Arsenal on seven occasions. Arsenal finished above Tottenham for 21 successive league campaign, stretching from the 1995-96 season, up until the 15-16 season. That streak was broken in the 16-17 season, when Arsenal fell out of the top four, while Tottenham finished in second.

Arsenal's unbeaten side travelled to White Hard Lane in April 2004, needing just a point to secure the league title. They went 2-0 up with goals from Patrick Vieira and Robert Pires, before Spurs fought back. Jamie Redknapp pulled a goal back for the home team, before Robbie Keane fired home a late equaliser to level the game. The home fans celebrated the goal, but it was the Gunners who celebrated at the final whistle, as they clinched the league title at the home of their fiercest rivals.

Later on that year, Arsenal visited Tottenham, and the match again produced fireworks. Spurs started much the better side, taking the lead through Noureddine Naybet. Thierry Henry grabbed a goal for Arsenal, and they were improved after the break, which saw a ding dong affair. Lauren fired Arsenal into the lead from the spot, before the teams exchanged goals. Jermain Defoe and Ledley King for the hosts, Vieira and Freddie Ljungberg for the visitors. Pires looked to have the game safe, but a late goal from Freddie Kanoute meant it was a nervy finish for Arsenal. They saw out the win and the game ended 5-4, the highest scoring north Lonon Derby to date.

In October 2008, Arsenal hosted Tottenham, at Emirates Stadium. The Gunners went behind early on, with a goal from former Arsenal player David Bentley. They hit back, and were 2-1 up after an hour. Emmanuel Adebayor scored Arsenal's third on 64 minutes, before Darren Bent made it 3-2 a couple of minutes later. Two minutes after that, Arsenal scored again, Robin van Persie making it 4-2. The hosts looked to see out the lead, but goals from Jermaine Jenas and Aaron Lennon at the death brought it back to 4-4.

In 2012, Arsenal hosted Tottenham twice, first in February, and then again in October. They put 10 goals past their rivals in the calendar year, as both matches finished 5-2 to Arsenal, with the Gunners recovering from 2-0 down in the first game. North London derbies have often been entertaining affairs, with plenty of goals.