How old is Ric Flair? Age, bio, titles of ‘The Nature Boy’ and wrestling legend 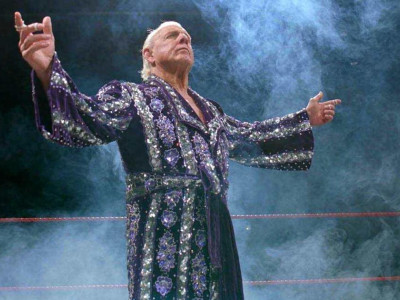 A multiple-time champion and Hall of Famer, Ric Flair has had an entertaining life in and out of the pro wrestling ring. Following a setback in his health, Flair took a long break from wrestling. Now, he will return to the ring on July 31 for one last match.

It is unknown who his opponent will be, but Flair is ready to “Woooo” again. “The Nature Boy” has been through it all, and he will working with Jim Crockett Promotions for a final curtain call to his legendary career.

The Sporting News looks into the career of Ric Flair and what he has done leading up to his return match.

MORE: Why is Ric Flair returning to the ring? Pro wrestling legend to compete in one more match

An amateur wrestler, Flair, real name Richard Fliehr, entered the pro wrestling world thanks to being trained by Verne Gagne. In 1972, he made his pro debut and adopted the name "Ric Flair." Flair competed in the AWA, NWA, WCW, and anywhere Jim Crockett Promotions needed him to go.

In 1975, he was involved in a serious plane crash that broke his back in three places. Despite doctors telling him his career should be over, Flair would return and wrestle until the late 2000s.

In 1981, Flair dominated the National Wrestling Alliance, becoming a major player in the NWA Worlds Heavyweight Title scene. A key franchise player, Flair competed in bloody feuds against Dusty Rhodes, Harley Race, Terry Funk, Hulk Hogan, and Sting. In '85, Flair formed the Four Horsemen with Arn and Ole Anderson, Tully Blanchard, and J.J. Dillon. The blueprint for all major factions nowadays, the Horsemen ran wild in the NWA and WCW.

Joining WWE in 1991, Flair became a two-time WWE champion and a Royal Rumble winner. He feuded with Randy Savage and Bret Hart before returning to WCW in '93. When WCW folded in 2001, he rejoined WWE. He became a two-time tag team champion and the Intercontinental Champion in his second run with WWE. In '08, Flair wrestled and lost to Shawn Michaels at WrestleMania in what was thought to have been his retirement match.

While making part-time appearances for WWE, Flair still had the itch to wrestle. He fought Hogan in Australia in 2009 and joined Impact Wrestling in '10. At first a manager, Flair would compete in matches that showed his age. He competed in a Lethal Lockdown match, as well as singles matches against Abyss, Jay Lethal, Mick Foley, and Matt Morgan. He tore his rotator cuff in a match in '11.

That year, he would compete in what has been his last match against Sting. Flair tore his left triceps in a bout he has stated he regretted competing in.

Flair returned to WWE in 2012, appearing in a part-time role. He also was involved in storylines with Charlotte, his daughter. Eventually asking for his release in '21, Flair has since appeared in AAA and the NWA.

He was placed in a medically induced coma in August of 2017. The coma was due to complications from bowel surgery, resulting in kidney failure. By late September, Flair was able to return home.

Outside of wrestling, he has appeared in music videos for Offset and Bad Bunny. Recently, he was involved in accusations of sexual assault following an episode of Vice TV's Dark Side of the Ring, which focused on the 2002 "Plane Ride from Hell." Flair has denied the allegations.