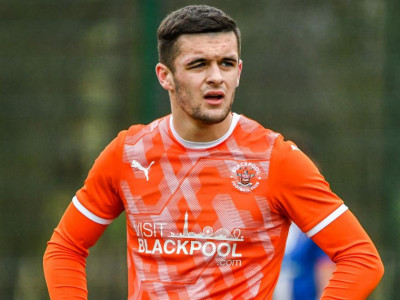 Blackpool FC star Jake Daniels has taken the inspirational step of becoming the first male English professional footballer to publicly come out as gay in over two decades.

The 17-year-old spoke exclusively to Sky Sports following his decision to make the statement after breaking into the Seasiders first team in 2022.

Daniels' move has been met with widespread online support as a bold step towards greater openness of LGBT communities within football.

His interview comes as part of a positive move towards addressing fears over negativity and abuse following Adelaide United star Josh Cavallo breaking down barriers as the only gay currently active professional player in 2021.

Daniels' crucial interview has opened a necessary conversation over the willingness of professional footballers to openly come out.

However, his move to become the first English-based footballer to publicly come out, will invoke memories of former Notts Country striker Justin Fashanu in 1990.

Fashanu came out as part of an exclusive interview with The Sun newspaper but a sustained public backlash to the report effectively ended his professional career.

His brave move remained as the only example of a English player to do so with former Aston Villa midfielder Tomas Hitzlsperger waiting until retirement before coming out.

Alongside Josh Cavallo, male players based in Australia and the United States have publicly come out, with Daniels becoming a ground breaker in England.

A handful of US-based players have come out during or after their playing days, including David Testo, Robbie Rogers, Matt Hatzke, Matt Pacifici, and Collin Martin, who currently plays for San Diego Loyal in the second division USL Championship.

Former Newcastle Jets attacker Andy Brennan was one of the first Australian footballers to come out when he did so in 2019 while playing in Victoria's National Premier Leagues.

Daniels' words will resonate a positive message of feeling confident about his public perception with a major focus on not wanting to lie about who he is.

"I feel like I am ready to tell people my story," he said.

"Since I've come out to my family, my club and my team-mates, that period of overthinking everything - and the stress it created - has gone. It was impacting my mental health. Now I am just confident and happy to be myself finally.

"In school people even used to ask me: 'Are you sure you aren't gay?' And I would reply, 'no, I'm not'. I wasn't ready and it was a struggle but I just don't want to lie any more."

His move has received sustained support from within the football community with Gary Neville, Gary Lineker and David de Gea all offering words of solidarity.

"It's a day of great importance for English football"Gary Neville and Jamie Carragher discuss Blackpool's Jake Daniels coming out as gay - the first UK professional footballer to do so publicly since 1990 pic.twitter.com/YzUrpfYP1M— Sky Sports News (@SkySportsNews)

Well played, @Jake_Daniels11. It’s been a brilliant season for you on the pitch, and now through your bravery, off the pitch too. I’m sure you’ll receive huge love and support from the football community and many others will follow your path. Good luck to you. 👏🏻👏🏻 https://t.co/H1kqBCDSZ4— Gary Lineker 💙💛 (@GaryLineker)