How did Rangers reach the 2021/22 Europa League final? 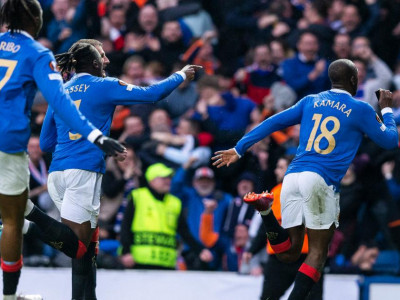 Rangers have made a continental final for the first time in 14 years with Giovanni van Bronckhorst’s team set to take on Eintracht Frankfurt in Wednesday’s Europa League final in Seville. Whatever happens, it will be a momentous and memorable evening in the Ibrox club’s history.

Questions were asked of Rangers after the surprise departure of Steven Gerrard to Aston Villa in November, but van Bronckhorst has quickly put his own stamp on the team even if the Govan outfit allowed Celtic to prise the Scottish Premiership title from their grip.

Europe has brought the best out of Rangers this season with victories over Borussia Dortmund, Red Star Belgrade, Braga and RB Leipzig showcasing their quality as a team. These are the reasons behind Rangers’ spectacular form in this season’s Europa League…

Under Gerrard, Rangers were renowned for their solid defensive foundation. Indeed, the Ibrox side kept a record 25 clean sheets in 38 league fixtures this season and this sound basis served them well in continental competition.

They silenced the Yellow Wall, were roared into the next round at Ibrox.The journey continues for Rangers who have saved their best for Europe.Question is... Would it be so wrong to dream a little bigger? ✨#UEL pic.twitter.com/FbLqQ66ge8— Football on BT Sport (@btsportfootball)

However, van Bronckhorst is a more attack-minded coach than his predecessor. In domestic competition, Rangers have sometimes struggled to break down low defensive blocks, but they have found plenty of space to play into in the Europa League. Rangers were devastating in quick transition against Dortmund and RB Leipzig and will be a danger against Eintracht Frankfurt too.

There is no denying Ryan Kent’s natural talent. However, the winger had just one goal and two assists to his name before the change of manager in November. Gerrard used his full backs to provide width with Kent pushed inside. In contrast, Van Bronckhorst has given Kent the freedom to play in the wide areas as he desires.

🎟️'I've got family I didn't even know I had asking for tickets!'🤩'The biggest game of our careers'Ryan Kent believes Rangers are destined for #UEL glory after the "beautiful struggle" to get to this stage🏆 pic.twitter.com/kXP1YH8Dod— Sky Sports Scotland (@ScotlandSky)

Kent is playing with a lot of confidence at the moment. Rangers will look to give the 25-year-old the ball as often as possible and the Eintracht Frankfurt defence might have to double up to stop him. Kent has long been linked with a move to the Premier League. He could sign off at Rangers by helping them win the Europa League.

Ibrox was a fortress for Rangers in the Europa League this season with the Govan side losing just one of the eight home matches they played in the competition. Indeed, the Rangers support played a significant part in pushing their team to the Europa League final with home wins achieved against Red Star Belgrade, Braga and RB Leipzig.

“The atmosphere played its part - it was the best atmosphere that I’ve ever experienced,” RB Leipzig manager Domenico Tedesco admitted after his team’s semi-final defeat to Rangers. Of course, van Bronckhorst’s team won’t have Ibrox’s backing in the final, but a travelling support of 100,000 from Glasgow is expected in Seville.

One of the most impressive things about Rangers’ Europa League semi-final victory over RB Leipzig was that they pulled it off with a number of key figures sidelined through injury. Alfredo Morelos was Rangers’ top scorer in the Europa League until he suffered a thigh injury in March. His direct replacement, Kemar Roofe, was also missing.

Ianis Hagi has missed much of the campaign while Aaron Ramsey has struggled for fitness since signing on loan from Juventus in January. Yet van Bronckhorst has found enough depth in his squad to keep pushing Rangers forward. The likes of Fashion Sakala, John Lundstram, Glen Kamara and Scott Wright have stepped up and they will need to find top form again in Seville.

Some Rangers fans had written off John Lundstram after an underwhelming start to his career at the club. However, the former Sheffield United midfielder has improved dramatically over the last few months and has been a central figure in Rangers’ run to the Europa League final. He will be very important against Eintracht Frankfurt.

Lundstram’s no-nonsense approach has made him a fans' favourite, but van Bronckhorst has also made good use of the 28-year-old’s tactical versatility. Lundstram is comfortable dropping into central defence. He can also dictate play from the centre of the pitch and even carries a goal threat, as he showed by scoring in the semi-final win over RB Leipzig.