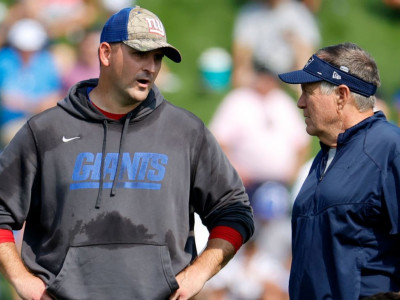 It's a key position on Bill Belichick's staff, given Jones' promise and the departure of longtime, innovative offensive coordinator Josh McDaniels to become the Las Vegas Raiders head coach.

Meanwhile, former Detroit Lions head coach Matt Patricia -- who spent the 2021 season as a senior advisor to Belichick in New England -- said he is working with the offensive line.

Belichick had previously identified Judge and Patricia as two leading coaches on offense, but had not publicly specified their roles, or if they would replace McDaniels as the playcaller on game day.

Judge was asked if he would call plays in 2022 and said: "Look, I'll tell you directly and honestly right now, nothing has been declared or decided or voiced to me. ... In terms of who calls plays, to be honest with you, that's not the main focus right now. When Coach wants to go ahead and declare a role like that, he'll tell us."

The Patriots are currently in the second phase of their voluntary offseason program, with coaches working with players on individual and full-unit drills. Reporters have not had access to practice, but Judge and Patricia detailed their responsibilities.

"In terms of who is coaching each position, you'll see me on the field with the quarterbacks," said Judge, who was 10-23 in his stint as Giants head coach from 2020-2021.

"I am working with Mac, along with all the skill group on offense. I'd say all of us are working collectively as a coaching unit with the entire offense. So that's the most direct and specific answer I can give you on that. ... It's been a main emphasis for us as a coaching staff, we want to make sure we can coach all the players and that nobody is out there with a lack of knowledge in the offense."

Judge said he watched months of tape on Jones leading up to the 2021 draft, and then Jones also made an impression on him when his Giants team practiced with the Patriots in the '21 preseason.

"There's a lot of things you're impressed with -- the accuracy, the presence in the pocket, the decision-making, things of that nature. I like the way he handled and commanded the huddle and team when we practiced against him; that's something that really stood out to me," he said.

As for Patricia, who was 13-29-1 in his tenure as Lions head coach from 2018-2020, he described his new role as a return to his roots in college and the NFL. When he was hired as a Patriots coach in 2004, one of his first jobs was with the offensive line, before he flipped to defense in 2006 and remained there for 12 years.

"I've been working with the offensive line, which has been great for me," he said. "It's been fun to get back to that."

Patricia's interview was his first since rejoining the Patriots more than a year ago, and he was asked what he learned about himself from his Lions tenure.

"Detroit was a tremendous opportunity for me. I'm very appreciative of [Martha Firestone Ford] and the organization," he said. "I think every year you're involved with football, you learn and grow. For me, being a head coach in Detroit allowed me to come in with different views or perspective or different ideas to talk about with Coach Belichick."

"And in a lot of ways, it's been great to be back and just have to focus on a singular job, and not multiple jobs. That part of it has been good."