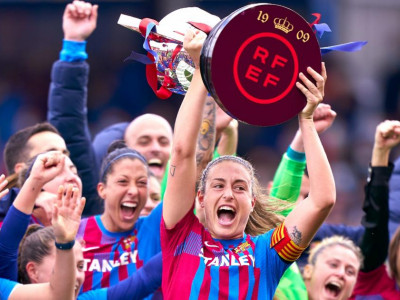 Barcelona and Lyon head to the Juventus Stadium for the UEFA Women's Champions League in a historic final in Turin.

The Catalan giants claimed their first Champions League title in 2021, as part of an incredible treble-winning campaign, and they will be looking to defend the trophy against the French giants.

Victory in the 2022 final would confirm Barcelona as the fourth club to defend the title, alongside VfL Wolfsburg, Umea and Lyon, since its inception in 2002.

Lyon's record of seven titles places them as the most successful club in the history of the competition, with their only final defeats coming against German sides, in 2010 and 2013.

UK: The match between Barcelona and Lyon in Turin is available in the UK on DAZN, with free access to the game DAZN's YouTube channel.

USA/Canada: The final is available in the United States and Canada via DAZN streaming platforms.

Australia: Fans in Australia can watch the match on Optus Sport.

After wrapping up a dominant Spanish title defence in 2022, with an incredible return of 30 wins from 30 league games, Barcelona face a European showdown with the majority of their star names available.

Star striker Asisat Oshoala has return from a knee problem and the Nigerian international will start alongside Ballon d'Or Féminin winner Alexia Putellas and Jennifer Hermoso in Turin.

Sonia Bompastor's Lyon side are closing in on the French domestic title after losing out to Paris Saint-Germain in 2021 and they need just two more points to confirm it.

Despite still having something left to play for in France, Bompastor has opted to rest certain players in recent weeks, and Lyon should be at full strength for the final.