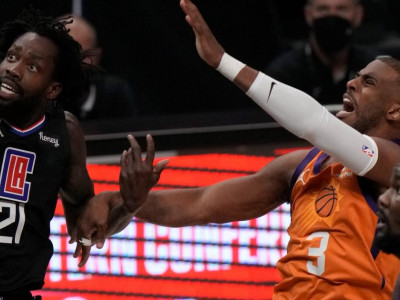 The NBA world watched in shock as Chris Paul and the Suns suffered a humiliating Game 7 defeat at the hands of the Mavericks. This was the No. 1 team in the NBA regular season having its halftime points total matched by one player.

The only person who didn't appear stunned was the Timberwolves' Patrick Beverley, who made no bones about Paul's place in the NBA after the point guard's 10-point performance in a game where he had one point through three quarters.

MORE: What is Chris Paul's legacy after blowout loss to Mavs?

"He can't guard. He literally can't guard," Beverley said to Stephen A. Smith on ESPN's "Get Up". "No he can't. Everyone knows that ... CP can't guard nobody man, everybody in the NBA know that. What we call him? Cone. You know what you do to cones? In the summertime you got a cone. You make a move. What does the cone do? ... Exactly. He's a cone. Stop playing, man. Everybody knows that. It's just y'all don't wanna accept it. ... But give him the Ben Simmons slander, give him the [Paul George] slander."

Beverley said this through Smith's repeated protestations about Paul's defensive prowess (Simmons, to his credit, is an elite guard on the perimeter when he plays).

Beverley also said Paul should have fouled out in Games 6 and 7, adding if Beverley made the plays Paul did people would be calling for reviews.

Beverley, however, wasn't done there.

He also said, still on "Get Up" but across from J.J. Redick, that the Suns "benched the wrong person" and Tyronn Lue would have benched Paul instead of Deandre Ayton where Monty Williams didn't.

Finally, Beverley explained his mentality when dealing with Paul the next day.

"Do guys in the NBA go to sleep early the night before playing the Phoenix Suns? Hell no," he said. "Chris Paul individually. No. I'm going to Steak 44 over there in Phoenix, I'm gonna have a nice little wine, probably sweat it out, and at the pre-game shootaround I'll get ready for Chris Paul. Steph Curry I'm going to bed at eight o'clock. Mom? Don't call me. My girl? Don't call me. I'm locked in right now. It's two different monsters, that's all."

All of this is coming on the heels of Beverley telling Jeremy Lin, of all people, that Paul doesn't deserve a title more than anyone else.

What u mean deserve why does he deserves it more?? https://t.co/Y0t0Sxbabu— Patrick Beverley (@patbev21)

Beverley even predicted Paul limping off the floor during the loss.

Beverley having these strong opinions on Paul shouldn't come as a shocker. According to Beverley himself, their rivalry has been going since high school.

"People don't understand, me and Chris -- what we have -- has been going on since I was in high school," Beverley said on Redick's "The Old Man and the Three" podcast in March (NSFW language). "A lot of people don't know the backstory but me and Chris? We clearly understand the backstory.

"I got invited to a Lebron James camp. You know, the big Nike LeBron James camp when I was in college ... Chris Paul was there. I killed him. Destroyed him. In front of every f------ NBA scout out there. I'm a sophomore in f------ college. I'm going at him every f------ play. I'm calling him a child. And then I see him in the NBA ... And he does slick s--- ... And I love CP. I love what he brings to the game -- he changed the game also. But he knows how to finesse the system too. And you gotta give him credit for that too."

With that backstory, knowing Beverley's mentality, it was ostensibly a huge chip on his shoulder when he was traded to the Clippers from the Rockets for Paul himself.

In his final year with the Clippers, Beverley left his mark on Paul while the Clippers were being blown out by the Suns in the Western Conference Finals. It started with Beverley elbowing Paul in transition during a regular season game between the Suns and Clippers.

Then it continued in the playoffs with Beverley mocking Paul when he injured him as Paul pulled up for a jump shot.

Beverley went on to really let his frustration get the best of him in Game 6 when the Clippers got eliminated, shoving Paul in the back as they walked toward their respective huddles.

Beverley is no stranger to confrontation with anyone, but his issues with Paul appear to be particularly personal. Paul will go down in NBA history as one of the best point guards ever to most, but Beverley clearly holds a slightly different opinion of the "point god."