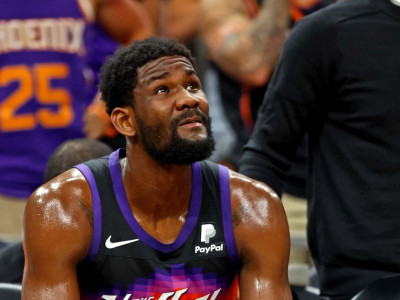 The Phoenix Suns were the best team in the NBA all season. After making a surprise trip to the NBA Finals last year, Phoenix was even better in Chris Paul’s second season with the franchise. The Suns won a league-high 64 games, saw Monty Williams capture Coach of the Year honors, and watched Devin Booker finish No. 4 in MVP voting.

Regular season success was never going to satisfy Phoenix. Booker had been referring to this season as a “revenge tour” after his team finished just two wins away from a championship last year. With Paul turning 37 years old during the playoffs and one major roster decision looming, the Suns knew this was their best chance at a ring for a franchise that’s never won one.

Phoenix’s season is now over, and the end was more humiliating than anyone could have imagined. The Suns were eliminated in the second round of the 2022 NBA Playoffs by the Dallas Mavericks after getting smoked in Game 7, 123-90, on their home floor in a game that amounted to an organizational-wide failure. Mavs superstar Luka Doncic had as many points as Phoenix did at halftime, Chris Paul melted down in the series after Game 2, and Williams was out-coached by Dallas’ Jason Kidd. No one involved with the Suns can say they had a good game in Game 7.

The big question now facing Phoenix in the offseason is the status of restricted free agent Deandre Ayton. The Suns took Ayton at No. 1 overall in the 2018 NBA Draft over Doncic, but opted against signing him to an extension before the season. Phoenix has the ability to match any contract Ayton signs in free agency, but doing so at the max number he desires would push the team into the luxury tax for the first time in more than a decade.

Ayton’s restricted free agency was always going to be a thorny situation for both the team and the player, and Game 7 against Dallas only made the situation more murky. Ayton finished the night with five points and four rebounds in only 17 minutes. Here’s what Williams said about it after the game.

An unverified report of Ayton and Williams needing to be separated also circulated during the game.

A complicated situation was only made more complicated by the Suns’ disastrous ending. Here’s everything you need to know about Ayton’s free agency before he turns 24 years old in July.

Phoenix can offer Ayton a max contract of $177 million over five years. Here’s. how the contract would break down, via ESPN’s Bobby Marks:

Per Marks, the Suns have $128.8 million already committed in salary, and are projected to be about $20 million below the tax threshold going into the offseason. If Phoenix resigns Ayton, uses its midlevel exception, and resigns JaVale McGee, the Suns would be looking at the biggest luxury tax bill in the league, up to $77 million, per Marks. No team paid more than $56 million in tax this season, and only two teams made more than $20 million in tax.

As a restricted free agent, Ayton can sign an offer sheet with any team who has the cap space to bring him in. Phoenix is the only team that can offer Ayton a five-year deal, and he’ll get slightly larger raises on his max deal if he stays with his incumbent team.

A max contract for Ayton from another team would be $131.1 million over four years. If a team creates space for Ayton and signs him to a contract, the Suns would have two days to match.

Of course, teams can create salary cap space with trades. To cite one example, a team like the Oklahoma City Thunder has been willing to take on big contracts in exchange for draft picks so teams can create cap space to make offseason moves.

Yes, absolutely. But that’s also easy for me to say because it’s not my money.

There’s no doubt the decision on Ayton became more complicated given his playoff performance. Dallas typically played small with five shooters on the floor, which invited a golden opportunity for Ayton to feast inside. While he did score 20+ points three times in the series, he had a tough time on both ends of the floor against Dallas’ spaced out attack.

Phoenix also has the ability to re-sign Devin Booker to a max extension this year that would make him on the league’s highest paid players when it kicks in in 2024. Can they really afford max deals for Booker and Ayton while Chris Paul is still making nearly $30 million per season and Mikal Bridges is making more than $20 million per season?

In the end, the cost of retaining Ayton for Phoenix is only money. Paul is entering the twilight of his career and doesn’t have a fully guaranteed contract beyond next season. Once CP3 ages out, Phoenix can have a young core of Booker-Ayton-Bridges to build around. The Suns would likely need to slot in another high-level creator to play next to Booker to really contend, but that’s still a great foundation to have in place.

The flip side of the argument is maxing out a center who isn’t an MVP candidate like Nikola Jokic and Joel Embiid and doesn’t shoot threes can be a dicey proposition. Hanging over all of this is in the investigation into Suns owner Robert Starver and reports of racism and misogyny throughout the organization. Starver’s status as Phoenix’s owner may or may not be in jeopardy.

The Suns were the favorites in many circles to win the title heading into the playoffs. If Phoenix won the championship, resigning Ayton and keeping the core together was a no-brainer. The question becomes much more interesting after a disappointing playoff exit. “Running it back” no longer feels good enough — the Suns need to get better.

It’s rare for a former No. 1 overall draft pick to be available at the end of his rookie contract, but that’s the case with Ayton. Whatever the Suns decide to do with him will go a long way towards shaping the future of the franchise.