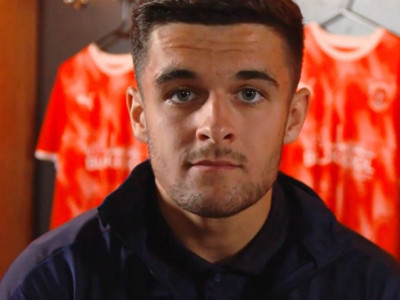 "I told my mum and my sister. The day after we played Accrington and I scored four, so it just shows how much of a weight off the shoulders it was and a massive relief."

Jake talks about coming out to his parents, his club, and his team-mates. On his desire to be honest and live his life without telling a lie. On the anxiety of wondering if his family and team-mates would be supportive and on how he hopes his actions can help others do the same.

This is his story:

Now is the right time to do it. I feel like I am ready to tell people my story. I want people to know the real me.

I have been thinking for a long time about how I want to do it, when I want to do it. I know now is the time. I am ready to be myself, be free and be confident with it all.

I can't really put a date on it, but I was probably five or six years old when I knew I was gay. So it's been a long time that I have been living with the lie.

At that age you don't really think that football and being gay doesn't mix. You just think, one day, when I'm older I'll get a girlfriend and I will change and it will be fine.

But as you get older you realise you can't just change. It doesn't work like that.

I did have girlfriends in the past, to try and make all my mates think I was straight, but it was just a massive cover-up. In school people even used to ask me: "Are you sure you aren't gay?". And I would reply, "no, I'm not".

I wasn't ready and it was a struggle but I just don't want to lie any more.

For a long time I've thought I would have to hide my truth because I wanted to be, and now I am, a professional footballer. I asked myself if I should wait until I've retired to come out. No other player in the professional game here is out.

However, I knew that would lead to a long time of lying and not being able to be myself or lead the life that I want to.

Since I've come out to my family, my club and my team-mates, that period of overthinking everything and the stress it created has gone. It was impacting my mental heath. Now I am just confident and happy to be myself finally.

I first told my mum and my sister, who I live with. "Yeah, we already knew," was how they reacted.

Then we told my whole family and at this point I was quite scared because I didn't know how the older generation might react.

I needn't have worried. I've had so many messages saying, "we are proud and we are supportive." It's been amazing. I couldn't have wished for it to go better.

The day after I told my mum and sister, we played Accrington [in an under-18s fixture] and I scored four goals, so it just shows how much of a weight off the shoulders and what a massive relief it was.

And Blackpool have been absolutely amazing too. I am with them every day and I felt safe. My team-mates have all been so supportive about it and everyone has had my back. They've been asking tons of questions, they have all been intrigued and their reaction has been brilliant. It's the best thing I could have asked for.

Of course, everyone was kind of shocked in a way and they were asking why I didn't tell them earlier. That was a great reaction because it showed how much they cared.

The captain was one of the main people I told and he also asked me loads of questions. In the end he just said, "I'm just so proud of you". It meant so much.

I like it when people ask questions. I just want to get it all out and for people to hear my story.

It's been quite a crazy year. I'm 17. I've signed a professional contract. I've scored 30 goals this season and I've just made my first team debut in the Championship, coming off the bench against Peterborough.

And now I have decided to come out.

Everything has happened at once but it feels right. When this season started, I just wanted to prove myself as a player. I think I have. So this was the one last thing in my head that I knew I needed to do. Now it's out, and people know. Now I can just live my life how I want to and you know what? It's been incredible.

The subject of being gay, or bi or queer in men's football is still a taboo. I think it comes down to how a lot of footballers want to be known for their masculinity. And people see being gay as being weak, something you can be picked on for on the football field.

Of course I am aware that there will be a reaction to this and some of it will be homophobic, maybe in a stadium and on social media.

It's an easy thing for people to target. The way I see it is that I am playing football and they are shouting stuff at me, but they are paying to watch me play football and I am living my life and making money from it. So shout what you want, it's not going to make a difference.

I won't stop people from saying that stuff, I just need to learn how to not let it affect me.

I am hoping that by coming out, I can be a role model, to help others come out if they want to. I am only 17 but I am clear that this is what I want to do and if, by me coming out, other people look at me and feel maybe they can do it as well, that would be brilliant.

If they think this kid is brave enough do this, I will be able to do it too.

I hate knowing people are in the same situation I was in. I think if a Premier League footballer does come out that would just be amazing. I feel like I would have done my job and inspired someone else to do that. I just want it to go up from here. We shouldn't be where we are right now.

I know that every situation is different and that there are a lot of different factors for other people to consider that will scare them a lot, especially in football.

And if you think you are ready, then speak to people. I know that's such a hard thing to do, it was a hard thing for me to do, but just speak to the closest people around you, you are going to get support you need.

"I was approached by Jake's representatives at the start of the year after he had decided that he wanted to come out publicly. I met Jake, his agent and his mum in Blackpool and we discussed what a road map towards sharing his news might look like.

"Since then, it has been a process driven by Jake and his desire to help others. Throughout, he has been afforded all the time he needs to reflect, without any external pressure. He has continued to tell us all, with absolute clarity, that he would arrive at this destination and be true to himself."

Blackpool FC: "Blackpool Football Club has worked closely with Stonewall and the relevant footballing organisations to support Jake and is incredibly proud that he has reached a stage where he is empowered to express himself both on-and-off the pitch.

"It is vital that we all promote an environment where people feel comfortable to be themselves, and that football leads the way in removing any form of discrimination and prejudice."

The Professional Footballers' Association: "We are extremely proud of Jake and have been working with him and his club. He has the complete support of everyone at the PFA."

Trevor Birch, EFL Chief Executive: "Coming out publicly in professional football will have taken great courage and I have huge admiration for Jake Daniels' decision to do so. This will no doubt serve as an inspiration to people everywhere and Jake has the full support of the EFL.

"As our national sport, football has a huge role to play as we seek to promote equality of all forms. We hope that this moment helps take us forward to a time where LGBTQ+ representation at all levels of the men's professional game is the norm.

"There have previously been players who felt that they had no place in the game as out gay men during their playing careers, but Jake is showing the world that you can be yourself.

"We hope that football will join us in celebrating Jake's news and take proactive steps to ensure that he receives the support he deserves, from players, fans, clubs and the football authorities."

The FA: "Jake, you are an inspiration to us all and we fully support your decision to be open about this part of yourself. Football is a game for all, with diversity at its heart, and this is a hugely positive step as we strive to build an inclusive game that we can all be proud of."

If you've been affected by any of the issues raised in this post, help is available online at sky.com/viewersupport