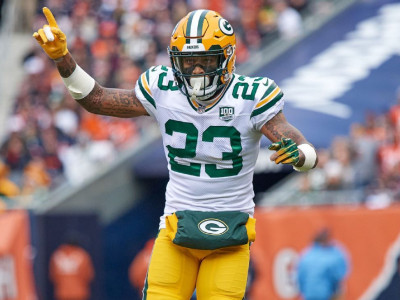 GREEN BAY, Wis. -- It was never a question of if the Green Bay Packers were going to sign All-Pro cornerback Jaire Alexander to a contract extension. It was only a matter of when and for how much.

Alexander had previously been tied to the Packers for only this season on the fifth-year option to his rookie contract. That would have paid him $13.294 million for 2022, and the entire total would have counted on this year's salary cap. With the signing bonus prorated and a lower base salary of $1.076 million, the Packers will create significant additional salary-cap space. Before this deal, they had about $11 million in cap space. Exactly how much cap space was created won't be known until the full details of the contract become available.

Packers cornerback Jaire Alexander's $21 million average per year is the highest for any defensive back, passing Browns cornerback Denzel Ward, who signed his deal last month.

Packers general manager Brian Gutekunst had hinted that an extension for Alexander wouldn't be far off. When asked before the draft last month whether they could get a long-term deal done with him, Gutekunst said: "I think we'll get [through] this draft weekend and we'll go down that road with some of those players."

"He's such a big part of what we're doing; he's been such a good player for us since the day he kind of arrived," Gutekunst said of Alexander earlier this offseason. "We'd love for [an extension] to happen. Certainly we've been in communication with his representation and we will continue to be as we go through the year."

The Packers' first-round pick (No. 18) in 2018 quickly became a star. He was named to the Pro Football Writers of America All-Rookie team in 2018, was picked as a Pro Bowl alternate in 2019 and made his first Pro Bowl in 2020 -- when he also earned second-team All-Pro honors.

Although he played in only four games last regular season because of a shoulder injury, he returned after a three-month absence to play in the NFC divisional playoff game against the 49ers. He led the Packers in pass breakups in each of his first three seasons and had the fourth-most pass breakups in the NFL from 2018 to 2020 with 42, according to ESPN Stats & Information data. Only James Bradberry (with 45), Stephon Gilmore (43) and Janoris Jenkins (43) had more.

The Packers have made a significant commitment to the cornerback position in the past year. They drafted Eric Stokes in the first round of the 2021 draft and then this March re-signed Rasul Douglas to a three-year, $21 million deal.