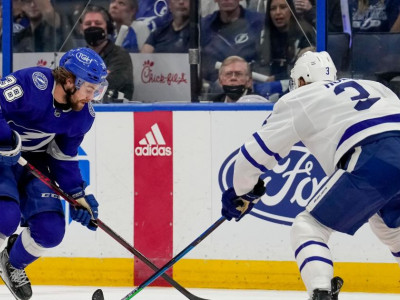 Is this year finally the year? It's a question Toronto Maple Leafs fans have been asking since the dawn of time, it seems.

But, after falling in overtime to a dramatic Brayden Point rebound goal, the Leafs have just one more chance to exorcise their playoff demons and finally win a playoff series; something they haven't done since the salary cap was implemented in the NHL.

The Lightning are on the other side of the playoff spectrum. They have the experience, having claimed back-to-back Stanley Cups; one of only nine teams to accomplish that feat in NHL history.

They proved they had the mettle, too. After blowing a two-goal first period lead in their Game 5 loss, the Bolts took care of business at home. Tampa Bay overcame Toronto's three-goal second period to get past the Leafs in Game 6.

Now, they travel to Scotiabank Arena. It's perhaps Toronto's last chance to salvage what has been a season of so many highs. All they have to do is get a win in front of a raucous home crowd.

"We've just got to put our balls on the line and go for it," Auston Matthews told reporters after Game 6.

Lightning vs. Maple Leafs Game 7 will air on TNT in the United States. In Canada, the game will air on Sportsnet and CBC in English and TVA Sports in French.

Viewers in the U.S. can stream every NHL playoff game live on Sling TV. With the Sling Orange Sports Extra package, get $10 off your first month now with access to ESPN, ESPN2, ESPN3 and TNT. NHL playoff games on ABC are simulcast on ESPN3, which is included with Sling Orange, available for $35 per month, including $25 the first month for new subscribers.

Game 7 of the Lightning vs. Maple Leafs series will start around 7 p.m. ET on Saturday, May 14. The game will be played at Scotiabank Arena in Toronto.