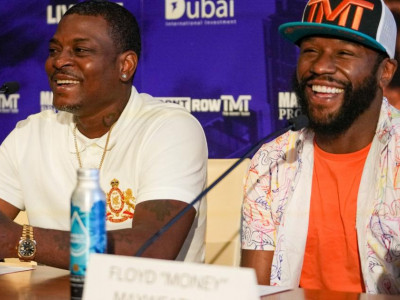 On May 14 on top of the Burj Al Arab Hotel helipad in Dubai, UAE, Floyd Mayweather was set to compete in another exhibition bout against former sparring partner Don Moore.

The fight has since been postponed, with no makeup date announced.

Mayweather, he has won titles in the super-featherweight, lightweight, welterweight and light-middleweight divisions. Mayweather has faced some of the most legendary fighters in the world, including Arturo Gatti, Zab Judah, Jose Luis Castillo, Ricky Hatton, and Shane Mosley. He initially retired in 2015 after beating Manny Pacquiao and Andre Berto. Returning in 2017, Mayweather beat Conor McGregor to end his career at 50-0.

Since the McGregor fight, Mayweather has competed in two exhibition bouts. He fought kickboxer Tenshin Nasukaw in 2018 and Logan Paul in 2021.

Moore competed in the ring from 1999 to 2016. He was trained by Floyd's late uncle Roger Mayweather. The last time he fought was in 2016, beating DeShaun Williams via knockout.

Due to the death of UAE President Sheikh Khalifa bin Zayed Al Nahyan, the fight was called off.

The UAE news agency WAM reported that government officials have suspended "work in ministries, departments, federal and local institutions, and the private sector" for the next three days. With the fight on Saturday, it falls under those named suspensions.

Originally set for May 14, there is no announced rebook date for Mayweather vs. Moore. The Sporting News will be providing more information as it presents itself.

When it takes place, fans can watch Mayweather vs. Don Moore on FITE.tv and LIVEnow.