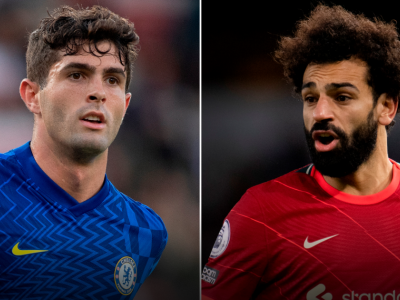 Liverpool continue their search for a historic quadruple as the Reds take on Chelsea in the 2022 FA Cup final at Wembley Stadium on Saturday.

It's a rematch of the League Cup final back in February, when the two teams played to a 0-0 draw, but Liverpool hoisted the trophy after a wild penalty shootout. Not a single penalty had been missed through the first 10 rounds of the shootout, and Liverpool goalkeeper Caoimhin Kelleher scored his 11th round effort before stopping that of Chelsea goalkeeper Kepa Arrizabalaga.

After that triumph, the Reds' pursuit of a historic season is still alive. Even without an unlikely Premier League crown, Liverpool could still very realistically come away with an unprecedented treble of knockout silverware. The Reds are next primed to take on Real Madrid in the Champions League final on May 28 to cap a memorable season.

Still, there's work to do at Wembley, and the Blues will be hungry to avenge February's disappointment. With many Chelsea players rumored to be departing Stamford Bridge this summer, it's the final chance for some to hoist a trophy with the club.

It's been another unbelievable season for Jurgen Klopp and Liverpool, who are two finals away from at least a cup treble, and they are also ready to pounce should Man City slip in the Premier League title race.

The Reds came up empty in regulation against Chelsea in the League Cup final, but prevailed on penalties. Liverpool put up 20 shots with a 2.40 expected goals (xG) total in the that final and failed to find the back of the net. It's unlikely that Klopp's side can be held back for a second game by a Chelsea side that has turned defensively frail.

In fact, across all three matches with Chelsea this season — two in the Premier League and one in the EFL Cup final — the Reds have collected 6.27 xG but returned just three goals. While Liverpool isn't exactly the best finishing team in the league, that number will surely come around, and Liverpool should come out on top in a defensive affair.

While Klopp has achieved great heights at Liverpool, the German boss has yet to beat his countrymate Thomas Tuchel with Chelsea in regulation. The penalty shootout victory this past February, which resulted after a 0-0 draw, is Klopp's only triumph across four meetings between their current clubs, with two Premier League games ending in a draw alongside a 1-0 Chelsea win.

Only one of those four games hit the over 2.5 total goals mark, as the two managers look to win the chess match each time out. Chelsea's defense has been solid in FA Cup play, blanking Middlesbrough and Crystal Palace in the last two rounds. Liverpool conceded twice to a prolific Man City side in its semifinal, but the Reds have also been extremely good at the back of late, conceding just four goals in their last 10 Premier League matches.

Taking both teams not to score projects as a decent bet given the above, but Liverpool has been blanked just three times in 59 matches across all competitions this season, with goals in both league matches against Chelsea this season. The under 2.5 total goals is a better play instead in a game that neither side will allow to get away from them.

Romelu Lukaku was expected to be the main central striker for Chelsea this season, but the Belgian's dismal season has meant that no Chelsea player has truly emerged as the primary goalscoring threat. There's no consistency in the Chelsea attack and no one true threat.

While that's often harder to gameplan against, not knowing who will play from match to match, it also means Chelsea has very little chemistry up front. As a result, the season has been a streaky one. Over the last four Premier League matches, Chelsea has scored just four goals in four matches, winning just once.

Additionally, while Liverpool can sometimes be beaten on set pieces, they are incredibly hard to beat through open play. In Premier League matches, Liverpool has conceded 25.03 expected goals allowed (xGA) by open play, second fewest in the league. The club, however, has conceded just 17 open play goals, meaning opponents are underperforming their xG by a massive eight goals. That indicates some luck for Liverpool thanks to poor opponent finishing, but across a large sample size like a full season, it also indicates excellent defensive prowess to not only keep opponents from creating opportunities, but also pressuring them when shots are delivered.

Why is that important? Because Chelsea is relatively tame on set pieces, creating the bulk of their chances from open play, to the tune of 50.74 xG out of their 66.28 total xG this Premier League season, a 76.6 percent share. Only Tottenham (87 percent!!) and Manchester United (77.4 percent) have a higher mark among the Premier League's top seven teams.

Just like in the League Cup final, Chelsea will find it difficult to find a way through.

Prop kicker: Liverpool to keep a clean sheet (+200 on DraftKings)