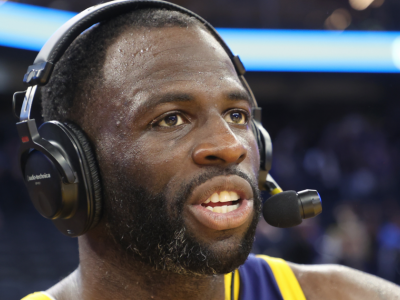 Shortly after the Golden State Warriors booked the ticket to the Western Conference Finals for the first time in three seasons, Green called out ESPN analyst Kendrick Perkins during his post-game media conference.

Perkins and Green have exchanged words over the past 18 months, but most recently during this series, Perkins criticized Green following his ejection in the first game of the series.

After the Dubs' win on Friday, in which Green had 14 points, 15 rebounds and eight assists, the enigmatic forward didn't hold back in his thoughts on Perkins.

"I saw somebody say I'm scared to shoot the basketball. Scared and me in the same sentence... a big ogre on TV talking about what Draymond say ain't the gospel. It is the gospel," he said.

"What I say is the gospel. When you say that multiple times on several different segments, you must think what I say the gospel. So, you know, you gotta come out and shut some guys up sometimes."

And just in case it wasn't clear who he was talking about, Green called out Perkins by name.

"These are people who get employed on TV to talk about our game... You make that pass, I would like to see it. I played against that guy by the way, I'm talking about Kendrick Perkins for those of ya'll who don't know."

It didn't take Perkins long to respond, though.

Let's see how this plays out from here.