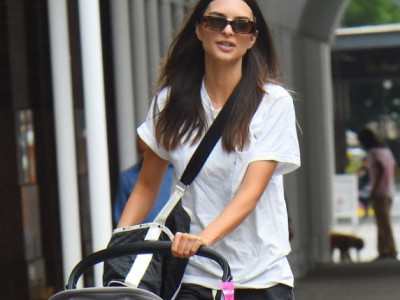 Emily Ratajkowski is embracing the single life after her split from husband Sebastian Bear-McClard.

The model and My Body author was spotted taking a casual stroll with her son, Sylvester Apollo Bear, in New York City over the weekend.

Ratajkowski looked fit in a sporty outfit consisting of a loose white T-shirt with a breast pocket, black running shorts, and gray New Balance sneakers. She wore her long, straight hair down and accessorized only with sleek hazel tortoiseshell sunglasses.

The I Feel Pretty star was pictured carrying a black-and-white gym bag and pushing baby Sly in his gray Doona stroller. Later in the day, she changed into a pair of baggy gray sweatpants.

EmRata was not wearing her engagement ring or wedding band during the outing, as reports have stated that she separated from Bear-McClard due to his ongoing infidelity and is preparing to divorce him.